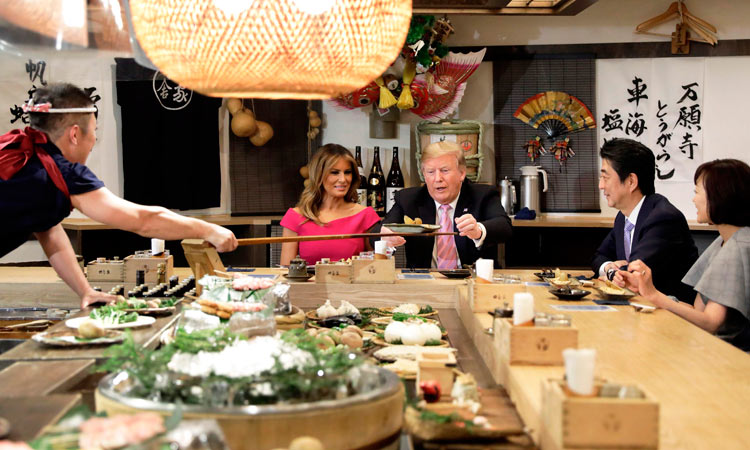 US President Donald Trump on Sunday played golf with Japanese Prime Minister Shinzo Abe and presented a trophy to the winner of a sumo tournament, turning to personal diplomacy for the second day of a Japan visit shadowed by tough trade talk.

Trump is unhappy with Japan's large trade surplus and is considering putting high tariffs on its auto exports if a bilateral trade agreement is not reached. The United States and China are also engaged in an expensive trade war that has pounded financial markets worldwide.

But it was all smiles on Sunday as the two leaders played golf and later, with wives Melania and Akie, watched giant sumo wrestlers grapple on the final day of a 15-day tournament won by rising Japanese star Asanoyama.

Trump, the first US president to watch sumo in the sport's homeland, waved to the audience as he entered the hallowed Kokugikan and then saluted them with applause as they waved and raised their phones to take photos. 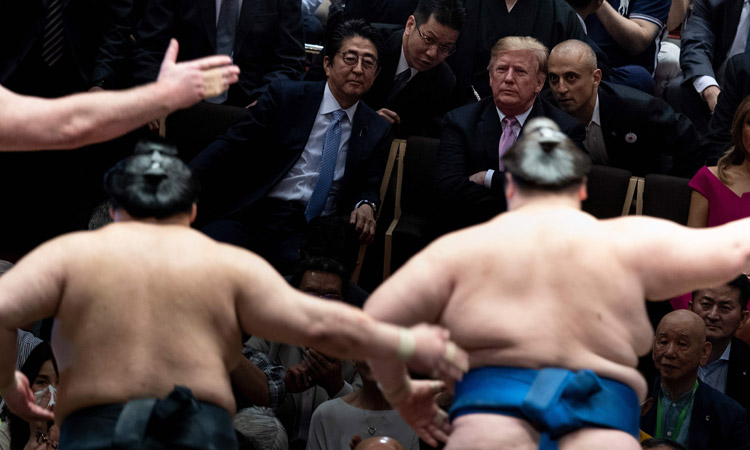 Arriving just in time for Asanoyama's bout, Trump nodded as Abe gestured in explanation, later watching as the three final wrestlers, wearing only traditional loincloths, lifted their legs high and stamped them to the ground in a ritual entrance.

The two couples used armchairs instead of sitting cross-legged on the "zabuton" cushions traditional for close ringside seats.

Trump, using a special set of wooden stairs fitted to the sumo ring, presented the 25-year-old Asanoyama with the President's Cup, a trophy topped with a bald eagle, the US national bird.

"In honor of your outstanding achievement as Sumo Grand Champion, I hereby award you the United States President's Cup," Trump said, reading from a prize certificate.

"The prime minister and I talked a lot today about trade and military and various others things. I think we had a very productive day.

The two met early at a suburban golf course. Trump, dressed in a red pullover, and Abe, wearing a blue blazer and white pants, smiled for photographers before taking off for their game, which took place in 30 degree Celsius (86 F) temperatures as an unseasonal heat wave blasts Japan.

Abe's office later posted a "selfie" picture on the course with Trump and Abe smiling together, Trump wearing a red "USA" cap. Abe said in the post he hoped to make the Japan-US alliance "even more unshakeable."

Despite the bonhomie, trade was never far from mind.

The President's Cup is kept on a display at Palace Hotel in Tokyo on Sunday. Brendan Smialowski/AFP

Supporters of US President Donald Trump gather near the Palace Hotel Tokyo on Sunday.

A police officer stands guard on a street near a hotel where Donald Trump is staying in Tokyo. Reuters

"Great progress being made in our trade negotiations with Japan. Agriculture and beef heavily in play," Trump tweeted after arriving back in Tokyo from the suburban golf course where the two played 16 holes.

"Much will wait until after their July elections where I anticipate big numbers."

Later, prior to the start of dinner at a traditional Japanese restaurant where the food is handed to the diners on paddles, Trump said the two had had a productive day.

"The prime minister and I talked a lot today about trade and military and various others things," he said. "I think we had a very productive day."

Beef was also heavily in play at lunch. The golf was followed by double cheeseburgers made with US beef, Japan's Foreign Ministry said in a statement.

The president's state visit is meant to showcase the strength of the Japan-US relationship, but tensions over trade have provided a backdrop of uncertainty.

“I hoped to make the Japan-US alliance ‘even more unshakeable.’

During remarks to business leaders on Saturday night, Trump ribbed Japan over its trading "edge" while saying progress had been made.

"With this deal, we hope to address the trade imbalance, remove barriers to United States exports, and ensure fairness and reciprocity in our relationship. And we're getting closer," he said.

"Just last week, US beef exports gained full access to Japan and to the markets in Japan for the first time since the year 2000. We welcome your support in these efforts, and we hope to have several further announcements soon, and some very big ones over the next few months."

US officials have played down prospects of any major progress on the president's trip.

The two leaders are also likely to discuss North Korea's nuclear and missile programs, another point where their thinking diverges.

Though Japan has said North Korea's recent missile launches were a violation of UN resolutions aimed at halting Pyongyang's nuclear and missile programs, Trump said on Sunday he was not concerned about them and was confident that the country's leader, Kim Jong Un, would keep his promises.