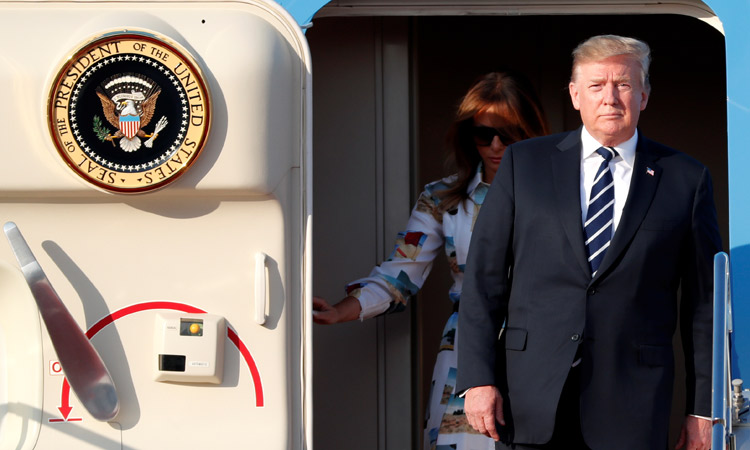 US President Donald Trump arrived in Japan on Saturday for a four-day trip likely to be dominated by warm words and friendly images, but relatively light on substantive progress over trade.

Air Force One touched down in Japan just before 5pm local time (0800 GMT) on a sunny Tokyo afternoon.

The official centrepiece is Trump's meeting on Monday with Japan's new Emperor Naruhito, who only ascended the Chrysanthemum Throne at the beginning of the month following his father's historic abdication for health reasons. 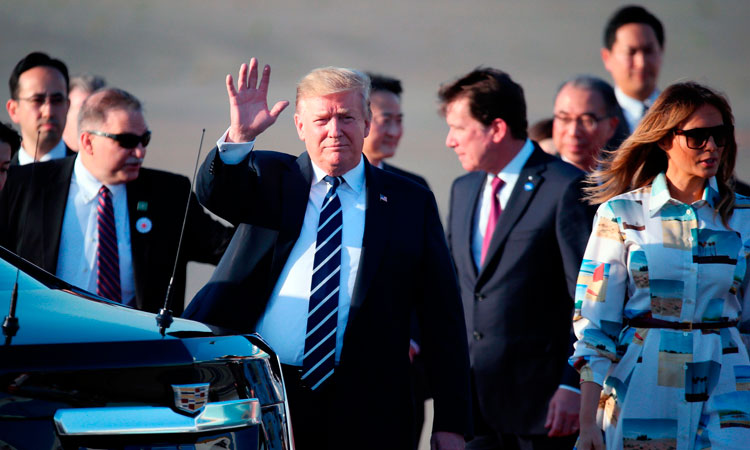 "With all the countries of the world, I'm the guest of honour at the biggest event that they've had in over 200 years," said Trump before his departure.

But the visual highlight is more likely to be Trump's visit on Sunday to the final day of the summer "basho" or sumo tournament where he is expected to present the cup to the winner.

Trump's appearance at the hallowed sumo hall has presented a logistical, security and protocol nightmare, ranging from where he sits to how he should be protected if the crowd start throwing pillows -- as tradition dictates when a Grand Champion (yokozuna) falls.

The leaders will play golf before going to the sumo and then repair with their wives to a restaurant in Tokyo's Roppongi entertainment district, where the menu features skewers of prime sirloin beef at 5,184 yen ($47) for two.

"With all the countries of the world, I'm the guest of honour at the biggest event that they've had in over 200 years.

Abe has just recently returned from Washington and Trump himself will be returning to Japan in just over a month for the Group of 20 leaders' summit in the western city of Osaka.

"Three visits in both directions in a short amount of time is really emblematic of just how close the relationship is," said a senior Trump administration official, who asked not to be identified.

A Japanese diplomat said the frequency of contact "demonstrates the unprecedented level of close personal relations between the Japanese and US leaders".

The formal diplomatic part of the trip is limited to a short bilateral meeting and a working lunch on Monday, after which the two leaders will brief the media.

They are also poised to meet families of people abducted by North Korea during the Cold War era to train Pyongyang's spies, an emotive issue in Japan that Abe has pressed Trump to raise in talks with the North's leader Kim Jong Un.

National flags of Japan and the US are displayed on a street in Tokyo. Kazuhiro Nogi/AFP

Policemen stand guard in front of a building in Tokyo on Saturday. Kazuhiro Nogi/AFP

A policeman checks a taxi in Tokyo on Saturday. Kazuhiro Nogi/AFP

Policemen stand guard on a street in Tokyo on Saturday. Kazuhiro Nogi/AFP

Trump arrives at Joint Base Andrews to board Air Force One. The president is traveling to Japan for official visit. AFP

Trump will also address troops at a US base in Japan, highlighting the military alliance between the two allies at a time when tensions are running higher with North Korea after the failure of the Hanoi summit in February.

But analysts expect little progress on the main issue that divides Japan and the US: trade.

US Trade Representative Robert Lighthizer is expected to hold talks with his Japanese counterpart on the sidelines of the visit but with Abe facing upper house elections in the coming months and Trump battling China, both are likely to avoid concessions.

"It's a smart move that shows he knows something about foreign policy and that he actually has a friend.

Some observers suspect Abe is rolling out the red carpet to present Japan as the most favourable of the countries currently engaged in trade disputes with Washington.

"Japan's strategy is to proceed with negotiations in a cool-headed manner," in contrast to the aggressive tit-for-tat tariff retaliations between the US and China, Shujiro Urata, a trade expert and professor at Tokyo's Waseda University, told AFP.

However, the trip is more likely to be about smiles and reaffirmations of a close alliance -- something Trump will doubtless welcome amid pre-2020 election turmoil at home and a bellicose Iran and China abroad.

"It's a smart move that shows he knows something about foreign policy and that he actually has a friend," said Robert Guttman, who lectures on foreign policy at Johns Hopkins University.