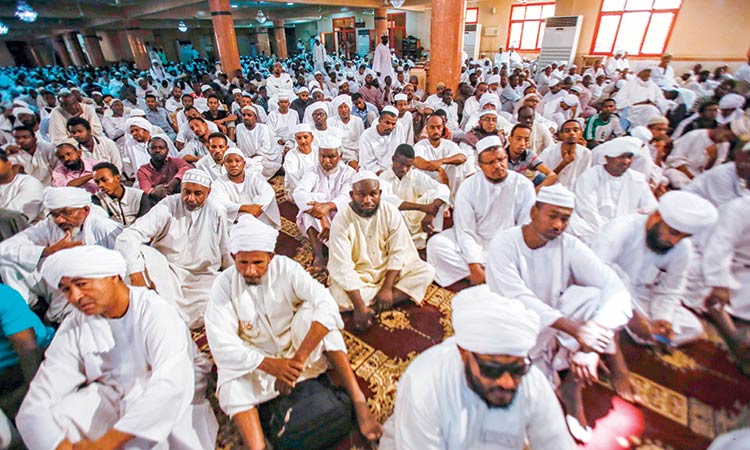 Sudanese pray at a mosque in the capital Khartoum on Friday. Agence France-Presse

Sudan’s protest leaders on Saturday issued a call for a two-day general strike next week, in a bid to press the ruling military council to transfer power to a civilian-led authority.

The Sudanese Professionals’ Association, which spearheaded the protests that led the army to oust President Omar Al Bashir last month, has now set a nationwide strike for Tuesday and Wednesday.

The SPA called on people to go to work but abstain from any activity, then head to various marches and sit-ins across the country.

The days of protest are set to culminate in mass rallies on Thursday, the SPA said.

It has threatened civil disobedience if the military council doesn’t hand over power to civilians.

Talks between protesters and the army reached an impasse on Tuesday, after both sides had agreed to a three-year transitional period but were split over the makeup and leader of the sovereign council that would run the country in the transition.

Protesters say they want a civilian leader and “limited military representation,” but say the ruling generals have refused to relinquish power over the council.

The Forces for the Declaration of Freedom and Change, which represents the protesters in the negotiations with the military council, said Friday that they have been forced to stage the general strike. The group said there was no other way “to rectify the course of the revolution and achieve its goals.”

“There is no longer any alternative to using the weapon of a general strike,” the Alliance for Freedom and Change said in a statement Friday.

It said the strike, affecting “public and private institutions and companies”, would be accompanied by civil disobedience and was “an act of peaceful resistance with which we have been forced to proceed”.

Talks between the protest leaders and generals have been suspended since Monday after a disagreement over who should lead the new authority -- a civilian or an officer.

The generals who seized power after Bashir was toppled have resisted calls from the demonstrators and the international community to step down.

The protest alliance said that on Saturday its leaders were to hold meetings with demonstrators at the sit-in outside the military headquarters to consult the demonstrators on how to end the deadlock in talks with the generals.