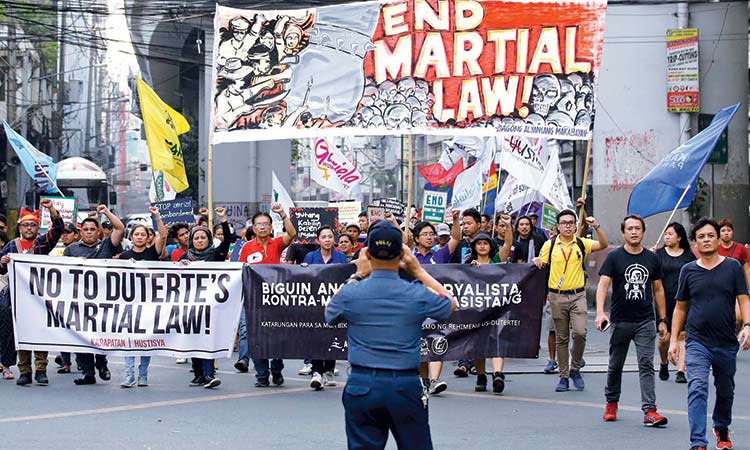 A policeman takes a picture of activists as they march to mark the second year of martial law in Mindanao, during a rally near the Malacanang palace in Manila, on Friday. Associated Press

Two years after Daesh-inspired terrorists laid siege on Marawi City in Mindanao in 2017, about 100,000 residents have remained homeless and are forced to stay  with relatives or in evacuation centers severely lacking in basic facilities like potable water, the International Committee of the Red Cross (ICRC) warned.

In a separate report, Save the Children, an international child welfare organization, warned that the unresolved conflict in restive Mindanao threatened the welfare of 1.8 million children who continued to face uncertainties in their homes.

Meanwhile, the ICRC, citing a report of its chapter in the Philippines, lamented that despite numerous aid efforts that helped Marawi residents, thousands remained homeless two years after the siege of Marawi, the capital city of Lanao del Sur, on May 23, 2017.

“They have grown tried and frustrated. They want to stand on their own feet again and stop depending on assistance,” said Martin Thailmann, the head of the ICRC delegation in the Philippines that has been assisting the refugees along with the government and other like minded organisations.

Thalmann added: “Whether they have been living with relatives or are in evacuation centers and transition sites, the displaced people of Marawi struggle for access to potable water, viable livelihood opportunities and, most importantly, permanent shelters.”

Drieza Lininding, the head of the Marawi-based civic organisation Moro Consensus Group, agreed with ICRC’s assessment as she expressed skepticism over the government’s promise to expedite the rehabilitation of Marawi by the end of the year.

In particular, Lininding doubted whether the government would be able to make significant inroads into the plight of the 100,000 internally displaced persons (IDPs) as a result of the siege.

“The government,” Lininding said, “is trying to show that it was able to address the issues and the need of the IDPs but, in truth, only a small percentage of the total number of IDPs have benefitted.”

In a related but separate development, Albert Muyot, the head of Save the Children Philippines, warned that about 1.8 million children in Mindanao continued to face uncertainties in their war-torn homes and schools while their parents struggle to find stable jobs and livelihood.