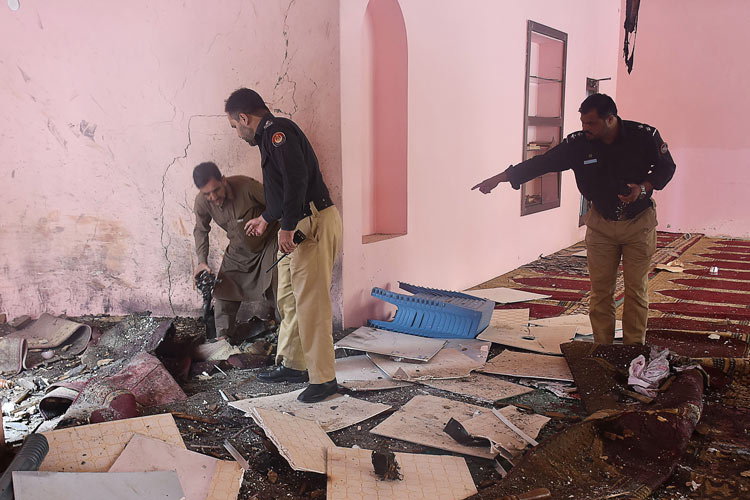 Pakistani police officials examine the interior of a mosque after a blast. AFP

At least two people were killed and more than two dozen injured by a blast during Friday prayers at a mosque in southwestern Pakistan, officials said.

Police chief Abdur Razzaq Cheema said the explosion — the latest violence in a string of attacks in restive Balochistan province -- was caused by a remotely detonated bomb.

"We have received two dead bodies and 28 injured," Dr. Mohammad Waseem in Quetta's Sandeman hospital told AFP, adding that about 12 patients were in a serious condition.

There have been no claims of responsibility for the incident.

The blast comes weeks after a suicide blast claimed by the Islamic State group in the provincial capital Quetta killed at least 20 people.

Balochistan, Pakistan's largest and poorest province — bordering Afghanistan and Iran — is rife with extremist, separatist and sectarian insurgencies, even as incidents of violence have significantly dropped elsewhere in Pakistan.

Militants still retain the ability to carry out attacks, including on major urban centres and tightly-guarded targets, and analysts have long warned that Pakistan is yet to tackle the root causes of extremism.

Balochistan is key to the China-Pakistan Economic Corridor (CPEC), part of Beijing's Belt and Road initiative.