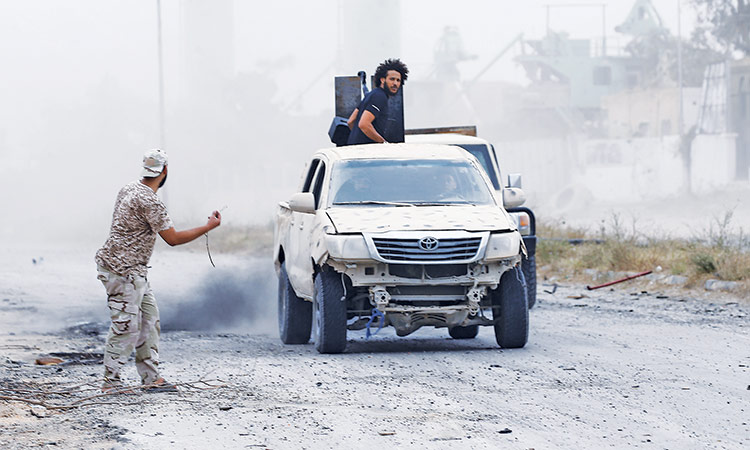 Fighters loyal to the GNA drive past the spot where a mortar had just hit in the Salah Al-Din area. Agence France-Presse

Between “six and 10 countries (are) permanently interfering in Libya’s problem” funnelling arms, cash and military advice to the country, he warned.

But the Libyans do not need outside help to fuel the conflict, which has ravaged the country since dictator Muamer Qadhafi was ousted in 2011, he said.

“The truth is that Libya can pay for its own suicide,” Salame lamented.

“I always considered my compatriots in Lebanon as stupid enough to commit suicide with somebody else’s money. The Libyans are even worse. They are committing suicide with their own money,” he told the International Peace Institute (IPI).

Lebanon was devastated by a civil war between 1975 and 1990, fuelled by regional rivalries.

Salame stressed that Libya was a rich country, producing 1.2 million barrels of oil a day.

“This is big money,” the UN envoy said. “Plus there are mines of gold, platine... The country is very wealthy, so it (the conflict) can expand.” He again urged the international community to “not only contain this conflict”.

“We need to work in order to put an end to this conflict,” Salame said, regretting the lack of unity at the UN over the issue.

He was speaking a day after warning the UN Security Council that the ongoing battle for Tripoli launched by strongman Khalifa Haftar on April 4 was “just the start of a long and bloody war”.

More than 75,000 people have been driven from their homes in the latest fighting and 510 have been killed, according to the World Health Organization.

More than 2,400 have also been wounded, while 100,000 people are feared trapped by the clashes raging on the outskirts of Tripoli.

The war has pitted Haftar’s forces against those of the UN-recognised government based in Tripoli.

The Security Council failed last month to agree on a draft resolution demanding a ceasefire in Libya and a return to political talks to end the conflict.

Haftar, who is leading a military offensive against the UN-recognised government in Tripoli, rejected a ceasefire requested by French President Emmanuel Macron during talks in Paris, an Elysee official said on Wednesday.

Hafter said the conditions for halting hostilities “were not met,” while acknowledging that a “political dialogue” is needed to end the standoff with his rival, Prime Minister Fayez al-Sarraj, the official said on condition of anonymity.

“But the mistrust between the two Libyans is stronger than ever,” the official said, acknowledging “an impasse between the international community’s desire for a ceasefire, and marshal Haftar’s way of seeing things.” He added that Haftar had justified the offensive he launched against Tripoli last month by saying he was fighting against “private militias and extremist groups” who are gaining influence in the capital.

Meanwhile, Sarraj said in Tunis Wednesday that any ceasefire could not be achieved without “the withdrawal of the forces of the aggressor”, according to a statement. In Paris, Haftar did not make a statement after meeting with Macron for over an hour, a visit that follows Haftar’s surprise trip to Rome last week for talks with Italian Prime Minister Giuseppe Conte.

Both Macron and Conte had already met recently with Sarraj, who has accused Paris of supporting Haftar and tacitly backing his assault on Tripoli, claims denied by French officials.

After the talks with Haftar, Macron’s office said the president reiterated France’s priorities in Libya: “Fight against terrorist groups, dismantle trafficking networks, especially those for illegal immigration, and permanently stabilise Libya.” France and Italy are the two lead European powers seeking to find a solution to years of instability, spreading Islamic extremism and a migrant crisis in Libya, which fell into chaos after the NATO-backed toppling of Qadhafi in 2011.

The UN envoy for Libya warned Tuesday the battle for Tripoli was “just the start of a long and bloody war” and called for immediate steps to cut off arms flows fuelling the fighting.