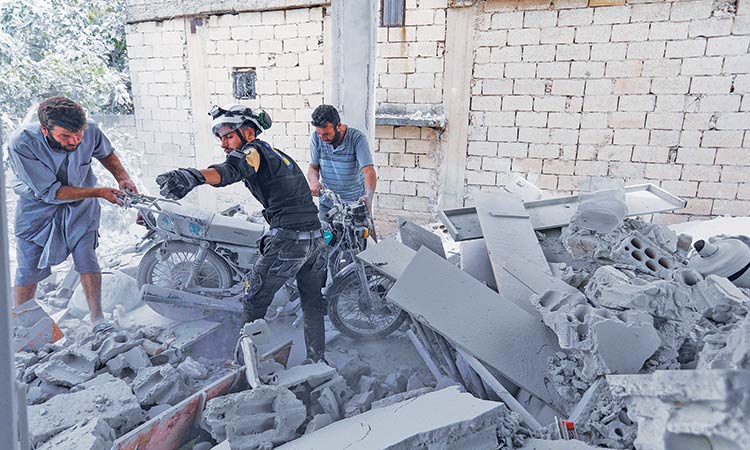 Two men help a member of the Syrian Civil Defence pull a motorcycle out of a building in Idlib. Agence France-Presse

President Bashar Al-Assad launched his offensive at the end of April in Idlib and parts of adjacent provinces with an intense bombardment, saying insurgents had broken a truce.

This week, rebels rolled back some government advances on the main battlefront, retaking the town of Kafr Nabouda.

Government forces are buttressed by Russian air power, while the main extremist group that dominates Idlib has been reinforced by Turkey-backed rebels.

Eight years into the civil war, Assad has retaken most of Syria and rebels still fighting him are squeezed into the northwest. Turkey-backed groups hold a strip of territory on the border, and Kurdish-led fighters hold the northeast.

This week’s fighting brought a big increase in air strikes, with bombs falling on towns and villages across the southern part of the enclave, said a British-based war monitoring group, the Syrian Observatory for Human Rights.

More than 200,000 people have now fled the violence since the end of April, the United Nations said, and are in urgent need of food and protection.

The Union of Medical Care and Relief Organisations (UOSSM), which provides assistance to health facilities, said the number of displaced this month had spiked to more than 300,000.

Most of the displaced have sought refuge along the border with Turkey, the UOSSM said, with camps springing up in the shadow of the frontier wall.

However, 44,000 people have moved to the regional capital Idlib and another 50,000 have gone to Maarat al-Numan, another large town where the Observatory said an air strike on a marketplace killed 12 people on Tuesday night.

The bombardment has used both conventional air strikes by war planes and “barrel bombs” — improvised explosives dropped by helicopter — according to the Observatory and rescue services.

Since the end of April, there have been 20 attacks on healthcare facilities and one on an ambulance, the United Nations said, putting 19 facilities that serve at least 200,000 people out of action. Some were hit more than once, it said.

The Observatory said 669 people have been killed since the end of April, 209 of them civilians. The UOSSM said 229 civilians had been killed in that period.

Rebels fighting on the mountainous western edge of the enclave said on Sunday that the army had shelled them with poison gas, leading some to suffer choking symptoms.

The US State Department warned it would respond “quickly and appropriately” if that was proven.

However, US Syria envoy James Jeffrey said on Wednesday that Washington did not have confirmation that poison had been used. Rebels said they had not documented the attack because they were under bombardment when it occurred.

The AK Party of President Tayyip Erdogan said on Wednesday there was nothing wrong with Turkey’s intelligence agency meeting Syrian counterparts to prevent conflict — even though Ankara has backed rebels fighting President Bashar Al-Assad.

The AKP was responding to a Turkish media report of high-level contact between senior Turkish and Syrian representatives.

AKP spokesman Omer Celik did not confirm that any meeting took place, but added that it would be natural despite years of antagonism between Erdogan and Assad.

Erdogan has called Assad a terrorist and said several times during Syria’s eight-year conflict that he must go. But with support from Russia and Iran, Assad has recaptured large parts of Syria, driving rebels from most of their former strongholds. Foreign Minister Mevlut Cavusoglu said in December Turkey and other countries would consider working with Assad if he won a democratic election. In February, Erdogan said Turkey has maintained low level contact with the Damascus government. 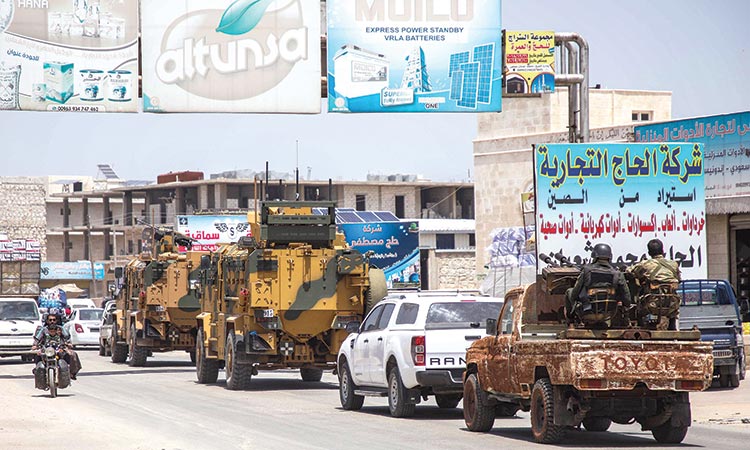 Thousands of documents purportedly found in abandoned Syrian government offices during the country’s civil war reveal the reach of President Bashar Assad’s shadowy security agencies that sought to eliminate dissent at all costs, according to a rights report published on Tuesday.