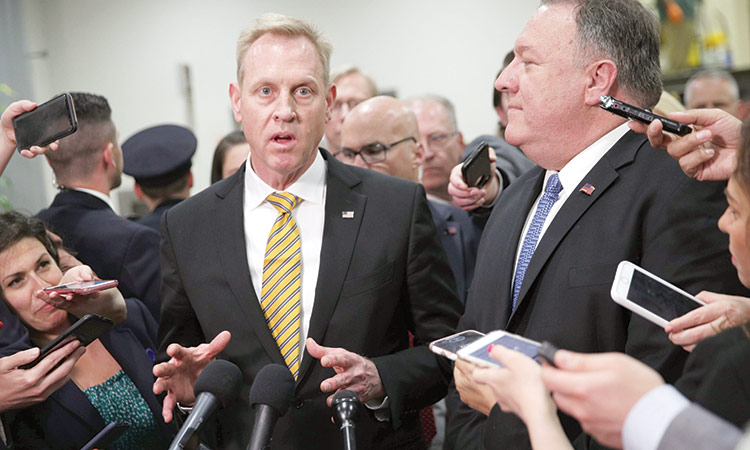 After a month of fiery warnings to Iran, top Trump officials delivered a classified briefing to the full US Congress where Democrats have accused the administration of hyping intelligence and pushing the United States dangerously close to war.

“This is about deterrence, not about war. We are not about going to war,” Patrick Shanahan, the acting defence secretary, told reporters after exiting the closed-door briefing he gave with Secretary of State Mike Pompeo.

Shanahan cast the US deployment of an aircraft carrier strike group and nuclear-capable B-52 bombers as reactive actions − and said they sent a strong signal.

“Our biggest focus at this point is to prevent Iranian miscalculation. We do not want the situation to escalate,” he said.

Pompeo and Shanahan are believed to have shared intelligence that blamed Tehran − enemy number one for Trump − for security incidents involving US-allied Arabs.

Representative Michael McCaul, the top Republican on the House Foreign Affairs Committee, said the administration made a convincing case that Iran and its proxies were behind numerous attacks − including a rocket that landed Sunday near the US embassy in Baghdad, which has been evacuated.

But McCaul also cast the US response as deterrence, telling reporters: “It was made very clear... there is no intention to go to war.”

“There will be painful consequences for everybody (if) there is an escalation against Iran, that’s for sure,” he said,” Zarif told CNN.

Meanwhile, a prominent reformist Iranian lawmaker said on Wednesday that Iran will “under no circumstances” enter a war either directly or indirectly with the United States.

Heshmatollah Falahatpisheh’s comments, reported by the semi-official ILNA news agency, carry additional heft as he serves as the chairman of the Iranian parliament’s national security and foreign policy commission.

“Under no circumstance will we enter a war,” Falahatpisheh said, according to ILNA.

“No group can announce that it has entered a proxy war from Iran’s side.”

Trump last year pulled out of a multinational agreement negotiated under his predecessor Barack Obama under which Tehran drastically scaled back its nuclear work in return for promises of sanctions relief.

The administration, which is closely allied with Riyadh, instead vowed “maximum pressure” to weaken Iran’s regional influence, including by trying to stop all oil sales by Tehran.

Democrats, while criticizing Iran, said its actions were predicted responses to Trump’s actions and vowed to hold the White House to account after the debacle over the 2003 invasion of Iraq.

Senator Bernie Sanders, an independent leftist who is seeking the Democratic presidential nomination, said that both the Iraq and Vietnam wars were based on lies.

“I worry very much that, intentionally or unintentionally, we can create a situation in which a war will take place,” Sanders told reporters.

“I believe that a war with Iran would be an absolute disaster, far worse than the war with Iraq,” Sanders said.

Representative Adam Smith, a Democrat who leads the House Armed Services Committee, said that Pompeo in the briefing gave “a very lengthy political argument” explaining “all the terrible things Iran has done” until the Democratic lawmaker said he cut him off and asked to hear about US policy.

“I think there’s a risk of miscalculation on both sides. And that remains my biggest concern,” Smith said.

Numerous Republicans have been clamoring for a tough stance on Iran that includes military options.

Senator Lindsey Graham, a longtime hawk who is close to Trump, called the classified briefing a “game-changer.” “The appeasement strategy against Iran is over,” he declared after the briefing.