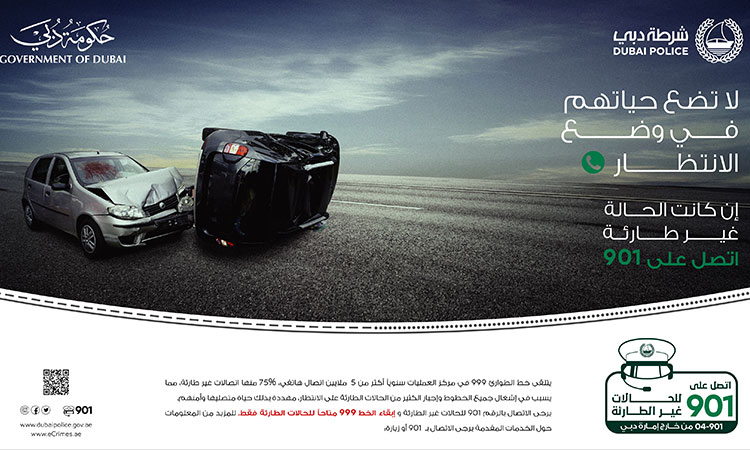 70 percent of 5, 351, 009 calls made to the emergency number 999 last year concerned non-emergency and non-serious matters, police revealed on Tuesday.

The announcement came during the launch of an awareness campaign titled “Do not put their lives on hold,” aimed at saving the lives of those at risk and instilling the culture of calling 901 for non-emergency cases.

The General Department of Operations and Department of Security Awareness launched the campaign to sensitize community members to use the toll free number 901 for non-emergency cases, inquiries and services.

“It comes within the framework of our keenness to protect lives and property and to enhance security, safety and the happiness of the community members. It supports the strategic goal of rapid response to emergencies.

“The aim is to make the public aware of the optimal use of 901 to reduce the pressure on the number 999. The call center of 901 is manned by qualified police officers who provide services to community members,” he said.

“There was an increase in the volume of calls to 999.” Shockingly, “70 per cent of them were non-emergency and non-serious. The percentage is high compared to global rates, for example USA, it stands at between 20-40 per cent.

“Time is of paramount importance in rapid access by police patrols and ambulances to any emergency. Emergency service on 999 is one of the most important services of protecting lives and enhancing the sense of security.”

Al Suwaidi earlier said one who calls 999 and asks about non-serious issues gives cops a hard time. By the time a cop tries to respond to someone inquiring a general matter, 15 to 20 emergency callers find the number busy.

Mr. Butti Al Falasi, Security Awareness Department Director, called on parents, schools and institutions to educate students and individuals on the correct use of emergency and non-emergency call numbers.