May plans ‘bold offer’ to get support for Brexit deal - GulfToday

May plans ‘bold offer’ to get support for Brexit deal 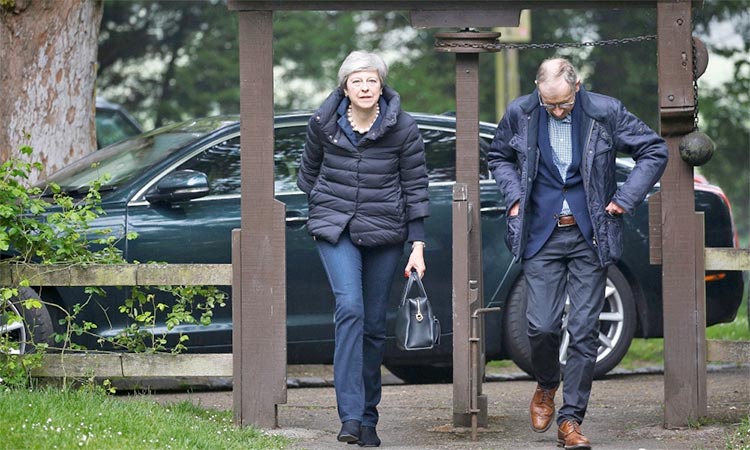 Theresa May and her husband Philip arrive at the church near High Wycombe on Sunday. Reuters

British Prime Minister Theresa May said on Sunday she was preparing to make a “bold offer” to MPs in one final attempt to get them to back her Brexit deal.

May said that when she brings the Withdrawal Agreement Bill before parliament early next month, it will come with a new package of measures attached that she hopes can command majority support.

“I still believe there is a majority in parliament to be won for leaving with a deal,” May wrote in The Sunday Times newspaper.

MPs three times rejected the deal May struck with Brussels, forcing Britain’s EU departure date to pushed back from March 29 to April 12 and again to October 31.

The bill is needed to ratify the divorce agreement struck with the European Union.

On Thursday, May agreed to set out a timetable for her departure following the vote in the week beginning June 3, regardless of whether MPs back her deal at the fourth time of asking.

It is thought that she will trigger a contest for the leadership of her governing Conservative Party once the bill either falls or completes all of its stages through parliament.

“When the Withdrawal Agreement Bill comes before MPs, it will represent a new, bold offer to MPs across the House of Commons, with an improved package of measures that I believe can win new support,” she told the newspaper.

“Whatever the outcome of any votes, I will not be simply asking MPs to think again. Instead I will ask them to look at a new and improved deal with fresh pairs of eyes − and to give it their support.” The bill is expected to include new measures on protecting workers’ rights, future customs arrangements with the EU, and on the use of technology to avoid the need for border controls between the United Kingdom and the Republic of Ireland, an EU member state and the UK’s only land neighbour.

It will not, however, seek to re-open the withdrawal agreement, which Brussels repeatedly insisted could not be re-negotiated, despite many MPs voting it down due to concerns about its so-called “backstop” clauses on Northern Ireland.

May is expected to set out the details of her proposals in a speech later this month.

Her gambit on Sunday comes ahead of the European Parliament elections, to be held in Britain on Thursday.

The opinion polls make dire reading for the Conservatives, with the newly-formed Brexit Party forecast to win the most seats, ratcheting up the pressure on May.

The latest survey out Sunday put eurosceptic figurehead Nigel Farage’s single-issue party way ahead on 34 per cent, with the main opposition Labour Party on 20 per cent, the pro-EU Liberal Democrats on 15 per cent and the Conservatives on 11 per cent.

Furthermore, the poll said the Brexit Party had overtaken the Conservatives in general election voting intentions too, with Labour leading on 29 per cent, Farage’s party on 24 per cent and the Conservatives on 22 per cent.

Opinium Research conducted an online survey of 2,004 British adults between Tuesday and Thursday for The Observer newspaper.

“A general election before we’ve delivered Brexit would be a disaster,” he told The Daily Telegraph newspaper.

“A general election before that not only risks Jeremy Corbyn, but it risks killing Brexit altogether.” The next Conservative leader is set to be chosen by the centre-right party’s members. Former foreign secretary Boris Johnson is the clear front runner, according to a YouGov survey of grassroots Conservatives for The Times newspaper.

Johnson was on 39 per cent, ahead of former Brexit secretary Dominic Raab on 13 per cent, interior minister Sajid Javid and Environment Secretary Michael Gove on nine per cent each and Foreign Secretary Jeremy Hunt on eight per cent.

The newspaper said May will consult cabinet colleagues on proposed changes to the withdrawal agreement aimed at securing cross-party support.

It said the cabinet will also consider plans for a series of indicative votes to establish which proposals can command a majority in parliament.