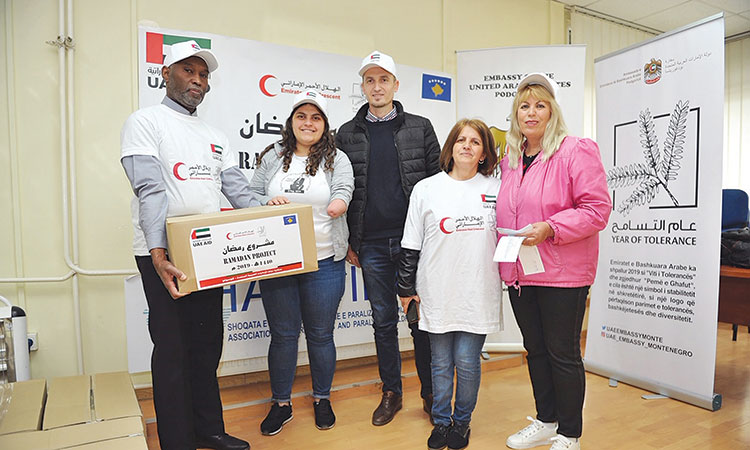 The UAE Embassy in Montenegro has overseen the distribution of Ramadan food baskets presented by the Emirates Red Crescent, ERC, across Kosovo for the benefit of 600 families.

Meanwhile, Minister in charge of Hajj affairs in Kerala K.T. Jaleel, Jamal Hussein Al Zaabi, Consul-General of the UAE in Kerala, and members of the mission distributed Ramadan Ration provided by ERC in Southern India for the benefit of about 3,000 needy people.

Jaleel extended thanks for the UAE government and people, Consul General and mission for their effort to provide humanitarian aid to population in South of India.

An earlier report said the UAE embassies and consulates are continuing to supervise the implementation of Iftar projects in several countries during the Holy Month of Ramadan.

The UAE Embassy in Wellington launched the first stage of its Iftar project in several cities across New Zealand, Fiji and Tonga, to provide food parcels to the underprivileged and organise Iftars, funded by the Emirates Red Crescent, ERC, the Khalifa Bin Zayed Al Nahyan Foundation, Sharjah Charity International, and the Zayed Charitable and Humanitarian Foundation.

Ahmed Salem Al Zuraim Al Suwaidi, UAE Ambassador to New Zealand and Non-Resident Ambassador to Fiji, said that the project coincides with the UAE’s declaration of 2019 as the Year of Tolerance, affirming that the UAE is leading efforts to promote fraternity, religious solidarity and mutual respect, as per the legacy of the Founding Father, the late Sheikh Zayed Bin Sultan Al Nahyan.

He also explained that such projects highlight the UAE’s social vision and its regional and international humanitarian role while affirming that the embassy in Wellington has adopted related plans and programmes for the third consecutive year in the Pacific region.

The UAE Consulate in Pakistan distributed Ramadan food baskets, provided by the ERC, to members of the “Dar Ul Sukoon Centre for Special Needs and Orphan Children” in Karachi, during the visit of Dr Salem Al Khadim Al Dhanhani, Consul-General of the UAE, and members of the consulate.

Local officials thanked the UAE for prioritising people of determination and poor families while praising its charitable and humanitarian efforts to strengthen the spirit of solidarity among the entire community.

The UAE Embassy in Denmark also distributed Ramadan baskets to families residing in the Danish refugee centre in Aunstrup, which is managed by the International Committee of the Red Cross, in cooperation with the Khalifa bin Zayed Al Nahyan Foundation.

Separately, the UAE Embassy in Vietnam has provided medical equipment to the outpatient treatment room at the National Institute of Hematology and Blood Transfusion to improve its treatment services.

During his visit to the institute, the UAE Ambassador to Vietnam, Obaid Saeed Obaid Al Daheri, and his accompanying delegation highlighted the UAE’s role as a global capital of tolerance, cultural communication and acceptance, and its rejection of extremism.

He also pointed out that the UAE declared 2019 as the ‘Year of Tolerance’, noting that the embassy would continue supporting thalassemia patients in Vietnam.

The hospital’s director thanked the UAE Embassy for its support to improve the quality of treatment provided by the hospital, adding that there are many thalassaemia patients in Vietnam in need of support.