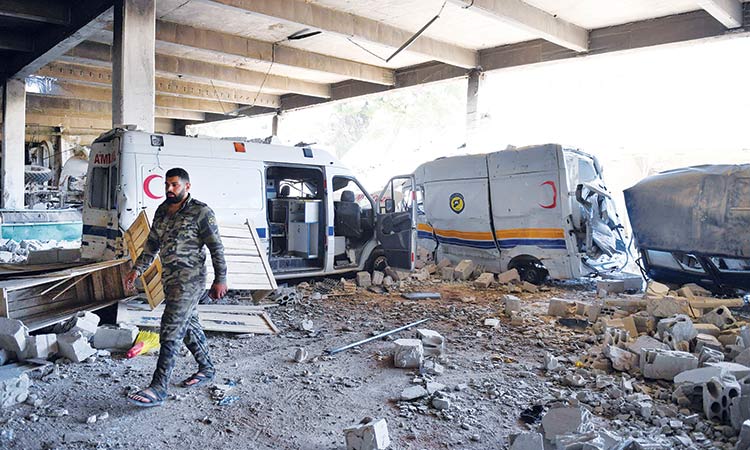 A Syrian soldier walks past destroyed vehicles in the town of Qalaat Al Madiq on Friday. Agence France-Presse

A spokesman for rebels said they rejected a ceasefire proposal from Moscow as long as government forces remain in villages they had advanced into in recent weeks.

There was no immediate comment from Ankara or Moscow.

At least 180,000 people have fled an upsurge in violence in northwest Syria, the last major stronghold of rebels who have fought against President Bashar Al Assad’s government since 2011. Government bombing has killed dozens in the past three weeks.

It marks the biggest escalation since last summer between Assad and his rebel enemies in Idlib province and a belt of territory around it.

The region, home to an estimated 3 million people including many who fled other parts of Syria as government forces advanced in recent years, has been partly shielded by a truce deal since last year, brokered by Russia and Turkey. Much of the recent fighting has hit a buffer zone agreed under that deal. Air strikes have struck 18 health facilities and violence has destroyed at least 16 schools, the United Nations says.

The Syrian government says it is responding to attacks by militants linked to Al Qaeda.

Mustafa Al Haj Yousef, the head of the Idlib civil defence — a rescue service that works in opposition territory — said the warplanes had not struck on Saturday.

The commander of a Turkey-backed rebel faction said it sent around 110 fighters to help insurgents in Idlib with a counter attack.

The reinforcements came from a nearby stretch of territory to the north under the control of rebels that Turkey supports close to its border. Another allied faction also sent scores of insurgents to Idlib.

“We consider the battles as seeking to eliminate all opposition factions,” Abou Al Hassan told Reuters.

The dominant force in Idlib is Tahrir Al Sham, the latest incarnation of the former Nusra Front which was part of Al Qaeda until 2016. Others, including some with Turkish backing, also have a presence.

Under its agreements with Russia, Ankara has deployed forces into the region at a dozen positions.

“We will not stop the combat operations and will try to take back the areas,” said Naji Mustafa, spokesman for the National Liberation Front (NLF) rebel grouping in Idlib.

He said the rebels had refused Moscow’s offer for a ceasefire, which came via Ankara, and wanted people to be able to return to their villages. He added that pro-government forces tried to advance on Saturday on one frontline in the Hama countryside near Idlib. Syrian state media said militants shelled army positions there.

Militant groups fired projectiles at the Hmeimim air base in the Jableh area and at the Al Qardahah area near the Syrian coastal city of Latakia, killing one person and wounding others in Jableh, state TV said.

Syrian air defence batteries on Friday intercepted projectiles coming from Israel and downed a number of them, the official news agency SANA reported.

A later report described the projectiles as “hostile targets” which were fired “towards the province of Quneitra” near the Golan Heights, parts of which are annexed by Israel.

Earlier SANA reported a “loud explosion” around the capital Damascus.

“They were Israeli strikes that targeted the Kiswah region where weapons warehouses belonging to Iran and (its Lebanese proxy) Hizbollah are located,” Observatory head Rami Abdel Rahman told AFP.

Israel has carried out hundreds of air strikes in Syria, most of them against what it says are Iranian and Hizbollah targets.

The latest report comes amid soaring tensions in the region between Israel’s arch-foe Iran and the United States.