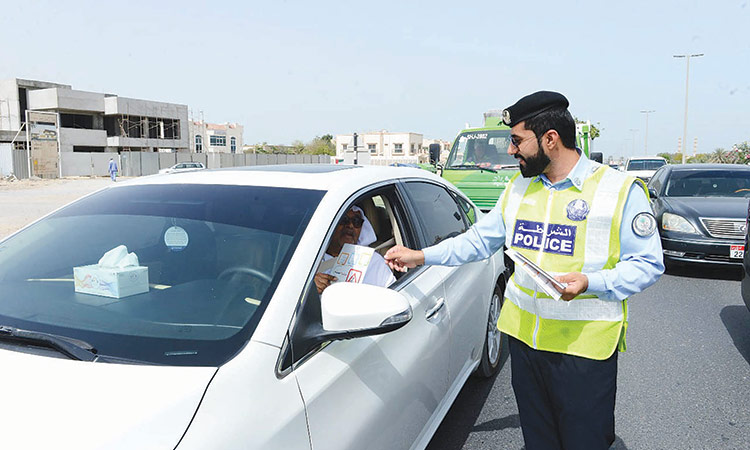 The Traffic and Patrols Department has intensified efforts on the roads as part of the “Aman Ya Ramadan” campaign, which was launched by the Sharjah Police General Directorate at the beginning of Ramadan. The ramped-up efforts seek to ensure a smooth and safe flow of traffic for road users. This is in line with the objectives of Sharjah Police, as part of the Ministry of Interior’s strategic goal of making roads safer.

Lieutenant Colonel Abdulrahman Khater, Director of Sharjah Police Traffic Awareness and Media, emphasised the importance of increasing the awareness and knowledge of road users about traffic laws by distributing multilingual awareness leaflets. The leaflets include instructions which draw the attention of drivers on the required safety measures and the importance of being cautious while driving.

Moreover, the Sharjah Police called upon drivers to abide by traffic rules and not step out of line. They also aim to encourage the cooperation between police and members of the society by intensifying patrols and security surveillance on both internal and external roads, apart from allocating awareness-raising patrols in residential areas and markets to give proper guidance to motorists and pedestrians to maintain road safety.

Lt. Col. Abdulrahman Khater pointed out that vehicles must be parked in designated parking areas, and drivers should not park or leave their cars in front of mosques during Taraweeh prayers as they hinder the movement of traffic.

He added that Article No. (62) of the UAE traffic law prohibits the parking of vehicles at intersections and turning of roads, which incurs a fine of Dhs500, while parking the vehicle in a crosswalk area entails a fine of Dhs500. Taxis parking in undesignated areas will be slapped with a Dhs500 fine and a deduction of 4 black points according to Article No. (61) of the traffic law.

An earlier report said the Community Police Department of the Sharjah Police embarked on programmes which were announced before the beginning of the holy month of Ramadan, which aimed at raising awareness among community members and attendees of Ramadan tents. The major objective of the programmes was to maintain safety and security, and prevent any form of negative behaviour from happening during the holy month.