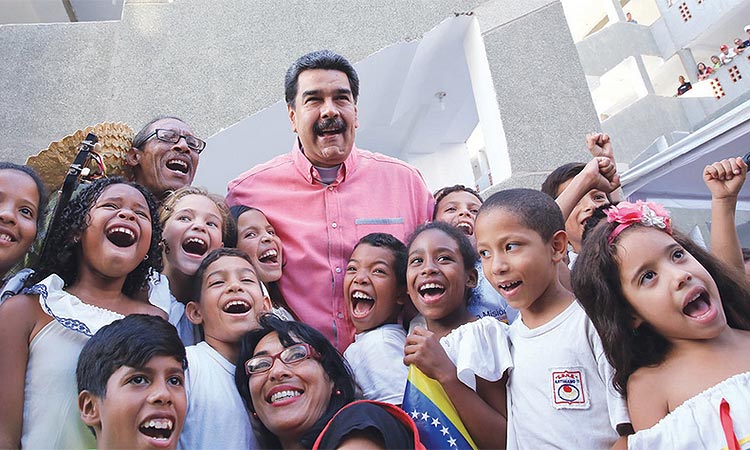 Nicolas Maduro poses with children after an event in Antimano, Caracas, on Thursday. Agence France-Presse

US police on Thursday evicted the last of a group of protestors who have been occupying the Venezuelan embassy in Washington in support of President Nicolas Maduro, ending a weeks-long standoff.

“The liberation of our embassy came about thanks to the struggle of the Venezuelan diaspora,” said Carlos Vecchio, envoy for opposition leader Juan Guaido, who declared himself interim president earlier this year in a power play against Maduro.

“With sacrifice they held the grounds against all adversity,” said Vecchio on Twitter.

Police and firefighting vehicles were seen inside the grounds of the diplomatic mission in the US capital, which was taken over last month by a number of left-wing and pacifist activists protesting Guaido’s bid to push Maduro from power.

In Caracas, Maduro condemned the eviction, saying it was done “in a brutal way” with commando-style forces.

Maduro said he had ordered beefed up security around the US Embassy in Caracas in line with what he called strict observance of international law.

“We are going to protect it even more, because Venezuela does comply with international law,” Maduro said in a televised speech.

The most high-profile of the groups behind the Washington occupation, CODEPINK, denounced what it called the “illegal entry and arrest at DC Venezuela Embassy.”

It promised to “keep fighting to protect the embassy from illegal takeover by Guaido forces.”

“All four of the peace activists who have been inside the embassy have now been arrested,” said Mara Verheyden-Hilliard, a lawyer representing the protesters.

A group of Venezuelans had gathered outside the cordoned-off embassy building on Thursday and were chanting slogans such as “Viva Venezuela.”

“I came to see the results of 14 days of our community action, of staying in our embassy to reclaim what belongs to us,” said Roberto Nasser, a 56-year-old Venezuelan, who had been spending up to 16 hours a day standing outside the building.

He and other Venezuelan residents of the capital had camped outside the embassy and tried to prevent any supplies from being delivered to the squatters inside.

Meanwhile, Norway confirmed on Friday it was trying to mediate a solution to the crisis, after Guaido said he sent delegates to Oslo but denied talks were underway with Maduro’s government.

The Scandinavian country said in a statement it had had “preliminary contacts with representatives of the main political actors of Venezuela.”

These were “part of an exploratory phase, with the aim of contributing to finding a solution to the situation in the country.”

“There are some envoys in Norway,” Guaido told a rally of his supporters in Caracas on Thursday.

Oslo was trying to bring both sides together, but talks have not taken place, he said.

“There is no negotiation whatsoever,” Guaido made clear in comments to reporters. Instead, Norwegian officials were “trying to mediate” with both sides to bring them to the table.

Maduro did not confirm the meetings but later said a close adviser, Communications Minister Jorge Rodriguez, was “on a very important mission for peace in the country in Europe” and would return shortly. Norway’s NRK radio and television network, quoting anonymous sources, earlier reported that talks had taken place over “several days” at a secret Oslo location and the delegations were due to return to Caracas on Thursday.

Guaido insisted the purpose of any negotiations must be the “cessation of the usurpation” by Maduro with a view to establishing a transitional government ahead of “free elections.”

Guaido said it was the second time Norway had invited representatives of both sides to the country for talks, though he did not elaborate.