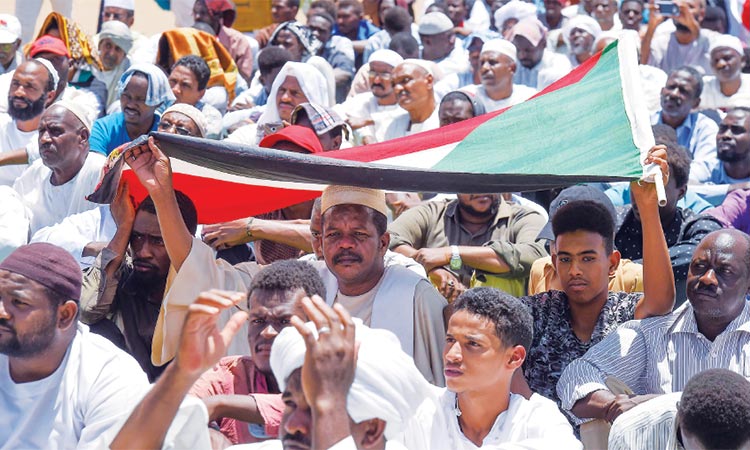 Protesters use a national flag to shield themselves from sun rays as they attend the Friday prayer in Khartoum. Agence France-Presse

The ruling military council suspended crucial talks on Wednesday with protest leaders for 72 hours, insisting that the security in the capital had deteriorated after demonstrators erected roadblocks on several avenues.

The council’s decision came as army generals and protest leaders were due to meet to finalise the make-up of a new body to govern Sudan for a transitional period of three years.

The issue is the thorniest to have come up in ongoing talks on reinstating civilian rule after the generals took over following the ouster of autocratic president Omar Al Bashir last month.

In the early hours of Friday, hundreds of demonstrators chanting revolutionary slogans tore down roadblocks on Nile Street, a key avenue, that had paralysed downtown Khartoum for several days.

“If our demand is not met, we will return to rebuild the barricade,” a visibly angry protester said as behind him demonstrators cleared away bricks and debris.

Protesters had erected the barricades to pressure the military rulers when talks commenced on Monday, but the roadblocks triggered clashes between demonstrators and security forces according to witnesses.

The military council said roadblocks across Khartoum are “totally unacceptable,” but the generals will allow barricades set up by protesters outside the army headquarters to remain and a sit-in there to continue.

Sudanese protesters attended prayers near the military headquarters on Friday, sitting on mats placed in rows on the street.

Talks between the two sides achieved significant breakthroughs on Monday, but were marred by violence which left five protesters and an army major dead. Protesters blamed the paramilitary Rapid Support Force, but Burhan said there were “armed elements among demonstrators who were shooting at security forces.”

The United States and Britain said the authorities were responsible for the violence.

The Alliance for Freedom and Change, which is leading the protest movement, said the move to suspend talks was “regrettable.”

“It ignores the developments achieved in negotiations so far... and the fact that Wednesday’s meeting was to finalise the agreement, which would have stopped the escalations such as roadblocks.”

The protest movement vowed to press on with the sit-in, and has also urged supporters to converge at the army headquarters where thousands have been camped out for weeks.

Protesters are demanding a civilian-led transition, which the generals have steadfastly resisted since bowing to demonstrators’ demands and toppling Bashir.

During the first two days of talks the two sides had agreed on an overall civilian structure, including a three-year period for the full transfer of power to a civilian administration.

They had also agreed that parliament be composed of 300 members for the transition, with around two-thirds from the alliance and the rest drawn from other political groups.

But the make-up of the new sovereign council has been the toughest part of the negotiations, with the two sides so far proposing different compositions of the body.

The council is expected to take all key decisions concerning national issues and the generals want it to be military-led, while the protesters insist it have a civilian majority.

The body is expected to form a transitional civilian government, which would then prepare for the first post-Bashir election after changeover period ends.

Sudan’s Transitional Military Council formed a joint committee with the Declaration of Freedom and Change Forces opposition alliance to investigate the targeting of protesters, DFCF member Madani Abbas Madani said on Wednesday at a joint news conference with the TMC. 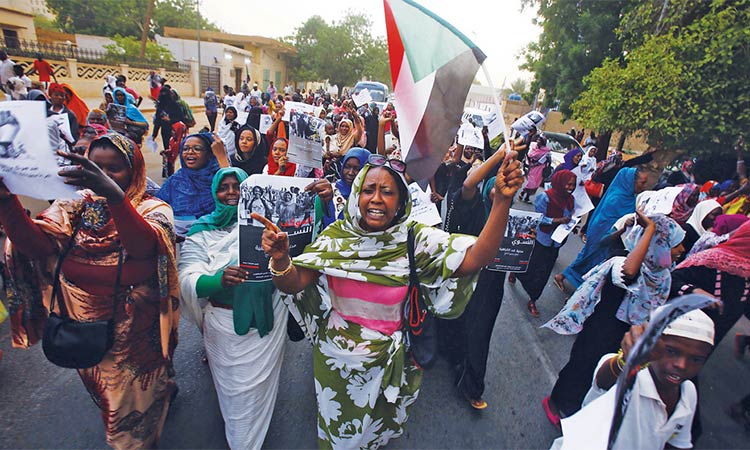