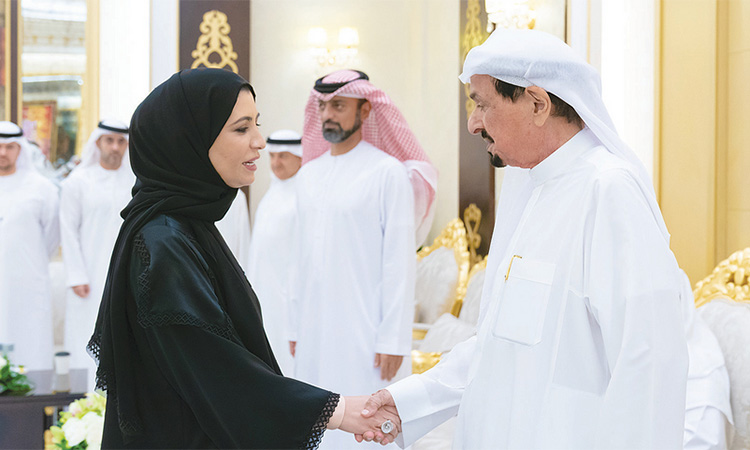 During the meeting, attended by Sheikh Ammar Bin Humaid Al Nuaimi, Crown Prince of Ajman and Chairman of Ajman Executive Council, Azza Suliman briefed Sheikh Humaid on the Tolerance Fund initiative, and its objectives and programmes.

The initiative was launched by the GHQ of Ajman Police, in collaboration with Dar Al Ber and several media outlets to help the inmates of all nationalities, who cannot afford to purchase tickets to return to their home countries or those who cannot pay their debts provided that the debt does not exceed Dhs15,000.

The initiative, a joint partnership between Ajman Police, Dar Al Ber Society and Emirates Vision Media Network, was rolled out during a press conference in a celebration of the Year of Tolerance 2019 and International Day of Happiness (20th March).

Major General Sultan Al Nuaimi, Commander-in-Chief of Ajman Police, said, ‘’The Tolerance Fund targets 1000 inmates of Punitive and Correctional Institutions who cannot afford to buy return tickets to their homeland and other inmates who defaulted on their debts, estimated at not more than Dhs15,000.’’ He explained that Ajman Police will provide information about inmates and process release procedures while the Dar Al Ber Society will raise funds for the initiative and Emirates Vision Media Network will broadcast a humanitarian case every week to collect donations.

Representatives from Dar Al Ber Society and Emirates Vision Media Network also spoke at the press conference about their contributions and roles in the initiative.

Dar Al Ber is considered one of the first charities in the UAE. It was established in Dubai in 1399 Hijri, 1979 AD as per the ministerial decree No. (23/78) issued by the Ministry of Social Affairs as a charity, cultural & social firm. Dar Al Ber Board of Directors has been formed according to the directives and decisions of His Highness, Sheikh Mohammed Bin Rashid Al Maktoum, UAE Vice President, Prime Minister and Ruler of Dubai - may Allah protect him.

Recently,  Human Appeal International, HAI, Ajman signed an agreement with the United Nations High Commissioner for Refugees, UNHCR, to allocate AED one million for the benefit of refugees and displaced in a number of countries.

The agreement, first of its kind between the two sides, was signed by Sheikh Mohammed bin Abdullah Al Nuaimi, Chairman of the Board of Trustees of the HAI and member of the Federal National Council and Khaled Khalifa is the Regional Representative of the UNHCR to the States of the Gulf Cooperation Council.

According to the agreement, HAI will fund development projects in Jordan, Lebanon, Niger, Iraq and a number of regions across the world to relief the refugees and displaced persons due to their dire living conditions.

Sheikh Mohammed bin Abdullah Al Nuaimi said that the philanthropic authority gives much attention to the displaced, refugees and vulnerable people in a number of regions globally. He added that it, through its offices and branches across the world, works hard to reach out regions in need for help in a number of poor countries.

In turn, Khalifa said that the partnership will support UNHCR’s efforts to meet the pressing needs of refugees in Jordan, Lebanon, Niger and Iraq through development projects that will contribute to improving their living conditions.

Human appeal international established in 1984 in the emirate of Ajman by an Emiri decree issued from the court of his highness sheikh Humaid bin Rashid Al Nuaimi -the member of the supreme council and the ruler of Ajman. Human appeal international is considered one of the leading organizations in charity and humanitarian fields as it fulfills and undertakes it principles and duties in improving life quality and providing the needy with their needs.