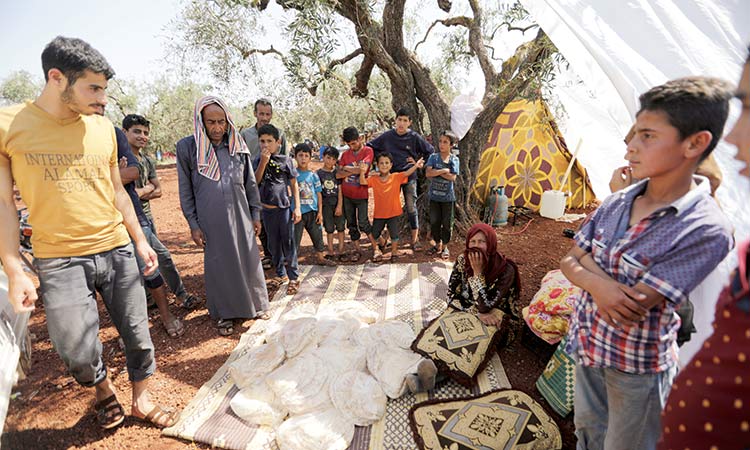 Displaced Syrians gather around stacks of bread in an olive grove at Atmeh town, Idlib province, on Thursday. Reuters

Iraq’s national carrier is to resume flights to the capital of neighbouring Syria for the first time since the war there erupted in 2011, a spokesman said on Thursday.

Rubaie said the resumption of flights between the two neighbours was “important,” citing bilateral trade, tourism and “the size of the Iraqi community living in Syria.”

The Syrian transport ministry welcomed the decision in a statement on its official Facebook page.

Rubaie said the last flight from Baghdad to Damascus took place in December 2011, before the service was suspended due to the conflict that erupted in Syria that year.

Most airlines stopped flying over Syria after the conflict broke out, with many taking longer routes to circumvent the war zone.

But the conflict has wound down in recent years, after major regime advances against rebels and jihadists with Russian military backing since 2015. Damascus has been largely spared the violence.

In April, the Syrian government said it had agreed to allow regional aviation giant Qatar Airways to resume flights over the country.

“The agreement came on the principle of reciprocity, as SyrianAir crosses Qatari airspace and never stopped flying to Doha throughout the war,” the Syrian transport ministry said at the time.

The use of Syrian airspace would see “increased revenues in hard currency for the benefit of the Syrian state”, it added.

Syria was suspended from the Arab League in November 2011 as the death toll escalated and several regional powers bet on President Bashar Al Assad’s demise. But the regime, backed by allies Russia and Iran, has since re-conquered much of the territory it had lost to rebels, and now controls some two-thirds of the country.

The United Arab Emirates and Bahrain have reopened their missions in Damascus.

Jordan reopened a key land crossing with its Syrian neighbour in October last year after a three-year hiatus.

Analysts said the move would help Syria inch its way back into trade with the wider region as it looks to boost its war-ravaged economy.