I am praying to God for forgiveness: Inmate - GulfToday 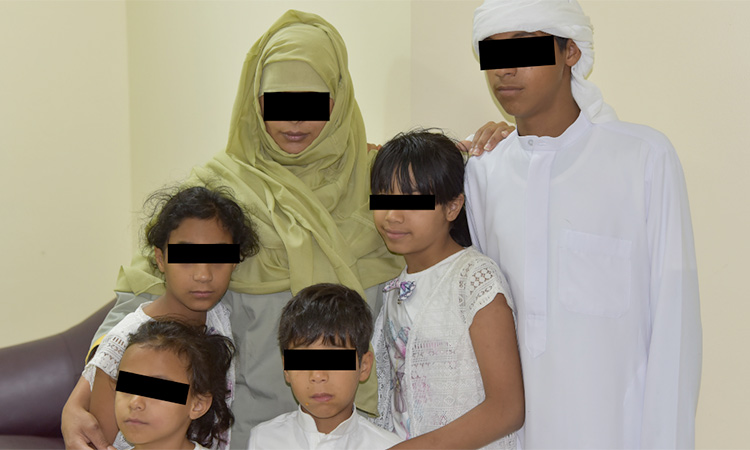 M and her five children at a special Iftar for inmates at the Umm Al Quwain Police General HQ-Punishment & Correctional Establishment Department on Wednesday.

Director Major/Doctor Saif Salam Zaid told Gulf Today the penitentiary as of Wednesday evening had 170 prisoners between 35 and 37 years old verdicted to have committed the crimes of “illegal drugs as well as civil case and immigration cases.”

“Most are from Nigeria and Pakistan, there are more men than women.”

Wednesday was one of the many special events meant for the prisoners since while immediate family members are entitled to visit them any time from 8am to 1pm on ordinary days and 9am to noon during the Holy Month of Ramadan, Merchant took one more step forward in his philanthropy.

“We have known Mr Merchant in the last 15 years. He (approached us and offered financial help) for many of the civil cases, including the return home tickets of many of our prisoners,” said Zaid.

He said the gesture is heartwarming even as the UAE Ministry of Interior continually upgrades its services to everyone locked up in jail such as the provision of the electronic system of visits whereby immediate family members would only have at least a minimum of 10 minutes to know of the approval of their visits on their chosen dates.

“We are also working now on the use of money exchange centres through which families could (remit money) for their loved ones here (so they could buy what they want from our store right here) like (toiletries).”

On Wednesday evening, the two boys and three girls of M, between six and 15-year-old, along with an aunt, their grandmother from Egypt, M’s mother, and other relatives, had the chance to celebrate Iftar together. Speaking to newsmen, M who, together with her children were visibly pleased and happy with the party, said: “I am praying for God to forgive (the wrong I committed). I hope He forgives me.”

“I also hope that this Year of Tolerance, something good happens with me. I am sorry for what I had done. I hope I am forgiven.”

She was convicted of the crime of selling illegal drugs: “I have forgiven my nephew (who caused it). He is family. I must forgive.”

M was happy since for the second time in a row, the police officials went out of their way to make the Holy Month of Ramadan special for her with the family visit and the “special Iftar.”

She volunteered that the authorities host birthday parties for children inside the facility.

“I do not know where God leads me to from here although (I yearn for Egypt). But wherever He takes me, that is His will, I will obey,” said M, as her four little children continually romped around her.

On Wednesday evening, among the prisoners who had conversations with Merchant was an Emirati man sentenced for a huge amount of debt.

It was learnt that Merchant has been going around all the penal institutions around the UAE since 2008, when the world begun to suffer from financial debacles from the late 1990s, to extend financial assistance to people with insolvency issues under the programme “Forgotten Society.”

“All of us expatriates are here for work. Most of the insolvent prisoners are expatriates, their families’ breadwinners. If we are not going to extend any help, how can they move forward and have the chance to (turn into new leaf)? We are human beings and we have to do something to humanity,” he said, adding that apart from paying the debts of this group of prisoners, their return tickets to their respective home countries are also taken care of.

“They have to be given the chance to earn their living again.”

For this Holy Month of Ramadan, Merchant is contributing to the release of 600 prisoners of huge debts. He will also help to secure the release of 400 others by the year end.  So far, the total amount volunteered was Dhs1.5 million.

Merchant said the yearly hosting of Iftars for prisoners beginning 2018 shall continue as families must be together. He also said: “I have seen in my own eyes how prisoners in the UAE are taken care of very well. They are not treated as (outcasts).”

The system will be implemented permanently in all local authorities in Ajman, except employees whose nature of work requires their presence in their offices, as well as employees on probation.

Both centres were temporarily shut down for the public safety and health, and they will be opened later after ensuring all conditions and requirements are complied with.

21 vehicles pile-up reported in Sharjah due to thick fog

Police patrols and ambulances rushed to the scene to handle the situation, and thankfully, the wide-scale accident resulted in the minor injury of two individuals only, while all other passengers and drivers remained safe from the crash.