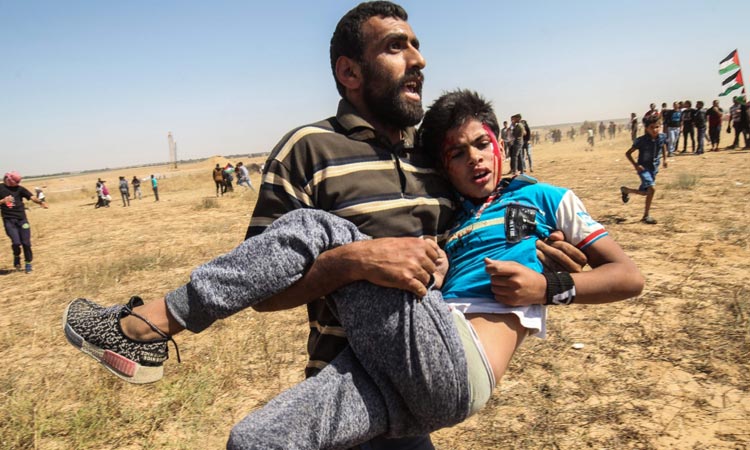 An injured Palestinian boy is carried away from the border fence during clashes with Israeli forces in Gaza Strip on Wednesday. Said Khatib / AFP

The Hague: Doctors and rights activists unveiled on Thursday the world's first field manual for the treatment of child casualties from explosions, which they say cause almost three-quarters of juvenile deaths and injuries in war zones.

"It starts from the point when something goes 'bang' and a child is exposed to that explosion," former British army surgeon Paul Reavley, one of the manual's authors, said.

"It then follows the child on a care pathway and focuses on the key differences of children compared to adults," Reavley said ahead of the launch at the Peace Palace in The Hague.

Save the Children said suicide bombs, landmines, grenades, unexploded ordinance, air strikes and other forms of explosives "account for 72 per cent of all child deaths and injuries across the world's deadliest war zones." In Syria the figure was 83 per cent.

The agency used UN figures from what it said were the five deadliest conflicts for children, in Nigeria, Afghanistan, Iraq, Syria and Yemen.

"This manual is a world-first guide to the unique procedures needed to keep children alive and help them recover fully following the catastrophic injuries from explosive weapons," it added.

Written in simple language, the illustrated 176 pages are a step-by-step guide on how to treat children hurt by explosions from the point of injury to post-treatment psychological and social support.

The pages are designed to be easily photographed on a mobile phone and can be downloaded from the internet for free.

"Their skulls are still not fully formed and their underdeveloped muscles offer less protection. So a blast is more likely to damage their brain and lungs or tear apart organs in their abdomen, even when there's no visible damage," he said.