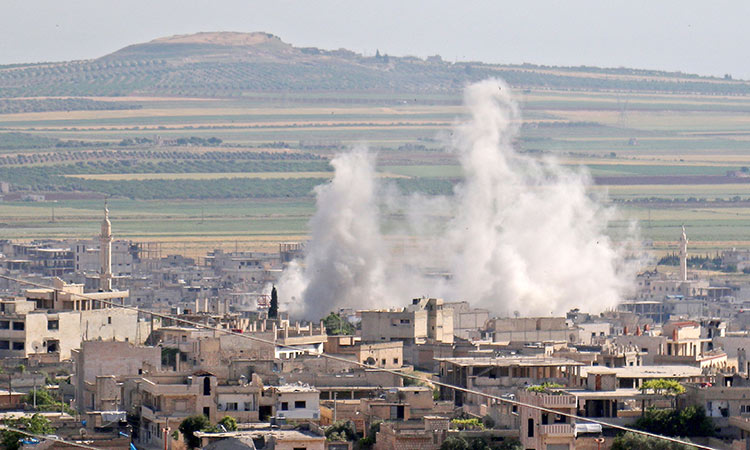 Smoke billows following a regime bombardment on the town of Khan Shaykhun in Idlib on Tuesday. Agence France-Presse

Turkish President Recep Tayyip Erdogan accused the Syrian regime of “seeking to sabotage” Ankara’s relationship with Russia through its latest offensive in the northwest of the war-torn country.

Idlib’s three million inhabitants are supposed to be protected by a buffer zone deal signed last September by Russia and Turkey.

Erdogan told his Russian counterpart, Vladimir Putin, during a phone call late on Monday that the offensive by President Bashar Al Assad’s forces “sought to sabotage Turkish-Russian co-operation,” according to Fahrettin Altun, communications director at the Turkish presidency, on Twitter.

The readout of the phone call made no mention of the fact that Russian forces are involved in the Syrian government’s offensive.

Russia and Turkey are on opposing sides of the conflict, with Moscow strongly supporting Assad, while Ankara has called for his ouster and supported Syrian rebels in the civil war since it began in 2011.

But Turkey and Russia have worked closely, along with Iran, to find a political solution to the conflict.

Erdogan lamented that “the regime’s ceasefire violations targeting the Idlib de-escalation zone over the last two weeks have reached an alarming dimension.”

He said it was impossible to explain it as a counter-terror effort given the number of casualties and damage to health services.

The Turkish leader also warned that the attacks risked undermining the fate of the political process in Syria.

The Syrian Observatory for Human Rights said 16 loyalists and 19 militants died between Sunday and Monday in clashes in the area of Jabal Al Akrad in Latakia province, which lies on the bastion’s northwestern edge.

Russian and regime aircraft bombarded the area on Monday, while they also hit southern parts of the militant stronghold, said the Britain-based war monitor.

HTS and its allies launched a counter-attack late on Monday, bombing areas in the north of the province and sparking fierce clashes on the ground, according to the Observatory.