Another minor raped in J&K - GulfToday 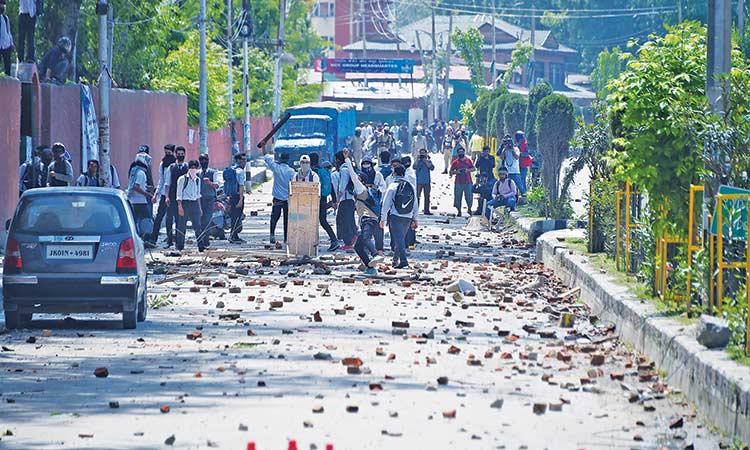 Students throw stones during clashes with troops in Srinagar on Tuesday. Agence France-Presse

Based on a complaint lodged by the family of a teenaged girl in Ganderbal, police arrested the accused and set up a special investigation team (SIT) for a speedy probe.

“The accused has been arrested and has been medically examined. An FIR under relevant sections has been lodged against the accused in Ganderbal police station,” a police officer said, adding that the incident had reportedly occurred on Sunday.

This is the second such case in the Valley during the last six days. On May 9, a 3-year old girl was allegedly raped in Bandipora district.

Though accused, Tahir Ahmed Mir, has been arrested, protests continued across the Valley demanding strict punishment to the accused.

Students at many places took to the streets and clashed with security forces on Tuesday as they demanded a speedy trial of the accused and justice for the victim.

Students of Amar Singh College came out of the campus and fought pitched battles with the security forces here.

The students were demanding a speedy trial of the accused, who has been arrested, and justice for the victim.

Students also protested in large numbers against the heinous crime in the Kashmir University campus in Srinagar. The students carried banners demanding death for the accused.

They appealed that nobody should use the highly sensitive issue for vote bank politics and everyone must try and get speedy justice to the victim.

Student protests were also held at a number of other places but these ended peacefully.

At some places, the moving vehicles were stoned, forcing the traffic to stop.