Modi trolled over his 'cloud' comment on Balakot airstrike - GulfToday 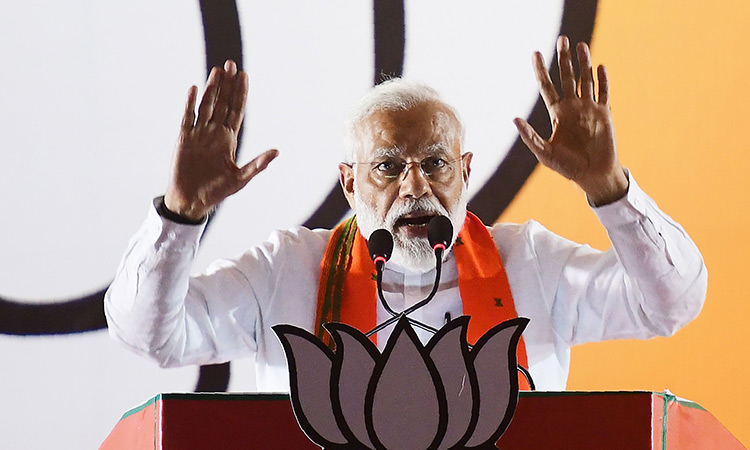 The Twitterati, who include film personalities and politicians, have ridiculed the comments and hilarious memes have been posted by several of them.

During an interview to News Nation aired on Saturday, Modi said, "Experts were re-thinking the airstrike due to bad weather, but I said, so much cloud cover and rains could be beneficial. Maybe we could escape their radar. This was my raw wisdom, I said there could be a benefit. Ultimately I said, there's cloud cover, please go ahead."

The Prime Minister's quote was shared on the official BJP and BJP Gujarat Twitter pages, only to be deleted later.

The remarks triggered a troll-fest on all social media platforms.

Politicians, celebrities and general public took to Twitter to express disbelief, shock and even anger against the Prime Minister.

"@narendramodiji some humble advice from a citizen. Science is real. Please consult someone qualified before you speak, so you don't embarrass India in the eyes of the world," said composer and singer Vishal Dadlani.

CPI-M General Secretary Sitaram Yechury said: "National security is not something to be trifled with. Such an irresponsible statement from Modi is highly damaging. Somebody like this can't remain India's PM."

"Looks like the tweet got lost in the clouds. Luckily there are screenshots floating around to help."

Stand-up comedians who enjoy a massive following also added their flavour. "He's (Modi) one step away from saying he was the pilot...," comedian Kunal Kamra tweeted.

In response to Modi's favourite "How's the Josh?" comment from the Hindi movie "Uri: The Surgical Strike", social media users memed: "How's the PM? High sir" "Don't know whether to laugh or cry. We elected him. The joke's on us #CloudCover," a twitterati said.

"Modi... will ask ISRO to send a Spacecraft to Sun during night because it will be cooler," another wrote.

Modi under attack for claims of using digital camera, email in 1988

After being trolled for his "cloud theory" on the Balakot air strike, Prime Minister Narendra Modi on Monday came under attack from politicians as well as twitterites for his claims that used digital camera and email in 1987-88 to send a photo to his mentor and party veteran LK Advani in a timeliness manner.