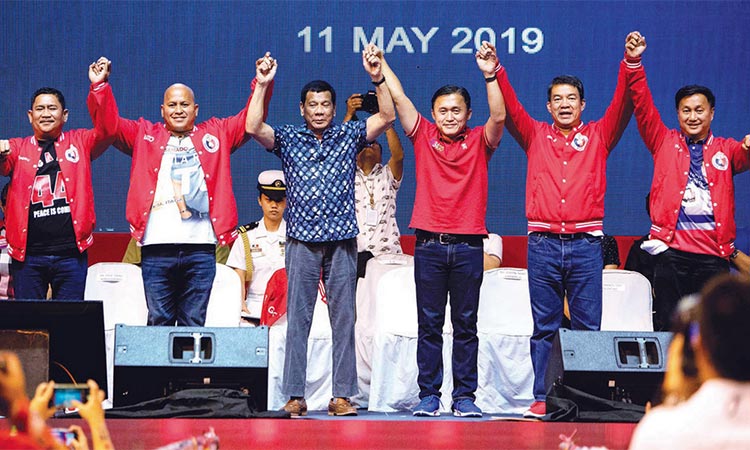 Rodrigo Duterte (centre) raises the hands of senatorial candidates during an event in Manila on Saturday. Agence France-Presse

Manolo B. Jara
About 61 million Filipinos are expected to troop to the polling precincts on Monday for the country’s midterm elections which political analysts and other experts said would also serve as a gauge mainly to determine President Duterte’s continued hold on power three years after he took over Malacanang Palace in 2016.

The Commission on Elections (Comelec) said that stake in the polls are 18,872 positions being contested by more than 43,000 candidates vying for the 12 Senate slots to be selected on a national basis as well as congressmen, governors, mayors and members of municipal and city councils.

The Comelec also reported that it recorded a total of 61 million qualified Filipinos allowed to cast their ballots in the Monday election, or an increase from the 54.3 million allowed to vote in the 2016 presidential polls.

These include the 1.8 million overseas Filipino workers (OFWs) qualified to vote in Asia, Middle East, Europe, the US and North America, among others, for the 12 senators as well as members of the party list system in the House of Representatives who are to protect and promote the interests of under-represented sectors like retired teachers and policemen, farmers, fishermen as well as small businessmen, according to Comelec.

It added that also for the first time, voting is to run for 12 hours on Monday from 6:00am to 6:00pm compared to the May 2016 election when voting was from 7:00am to 6:00pm even as the police and military went on the highest full alert to enable them to responded to any eventuality like violence or cheating.

As in previous elections, the Comelec acknowledged that the three “G’s” — guns, goons and gold — are to play a major role on Monday, with officials acknowledging that vote-buying has become more rampant.

However, political analysts and even politicians themselves acknowledged that Duterte appeared to have the upper hand in the Monday election, based on findings by a recent survey conducted by the private pollster Pulse Asia a week before the midterm polls.

Pulse Asia reported that most of Duterte’s candidates, led by re Cynthia Villar, who topped the list of 15 bets who have statistical chances of winning one of the 12 Senate seats up for grabs in the Monday polls.

The results showed that Villar and seven other Duterte candidates are assured of a Senate seat based on the preference vote of 1,800 respondents nationwide while the remaining seven including one or two opposition candidates are scrambling for the final four slots.

With this projection, Duterte has been assured of an overwhelming majority especially in the House of Representatives where his supporters always appeared to approve bills carrying the “imprimatur” of Malacanang.

But even with Duterte supporters still in the majority at the Senate, political analysts and even administration lawmakers like Aquilino Pimentel agreed that this would not make the chamber less independent.

“Senators receive a national mandate. They feel that their mandate comes from the people. In general, their loyalty is to the people,” said Pimentel, the president of the ruling PDP-Laban political party under which Duterte ran in his successful run for the presidency in the May 2016 election.

Victor Andres Manhit, founder and managing director of the advisory and research consultancy group Stratbase, agreed with Pimentel on the tendency of the Senate to show its independence to Duterte who appears to enjoy majority of support from Filipinos.

Another administration senator, Sherwin Gatchalian, pointed out that while there are 16 Duterte backers in the present Senate, this doesn’t mean that they are “blind followers” particularly on controversial issues.

“Senators still evaluate very critical measures and proposals,” Gatchalian said, “even though there’s the supermajority of some sort in this 18rh Congress, there will be strong voices that will awaken the consciousness of other senators.” 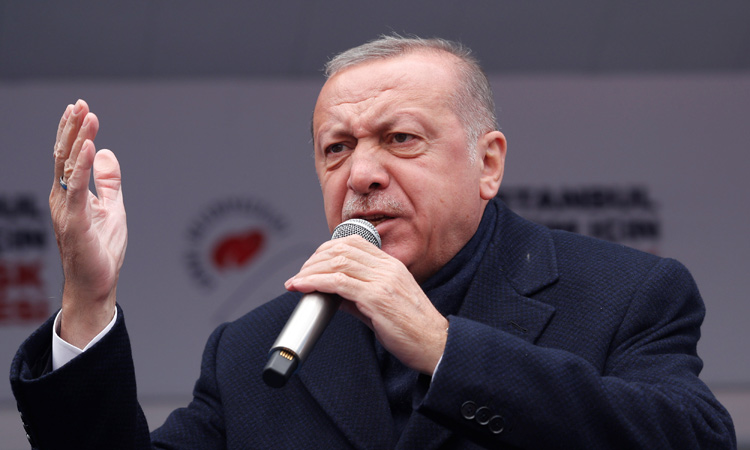