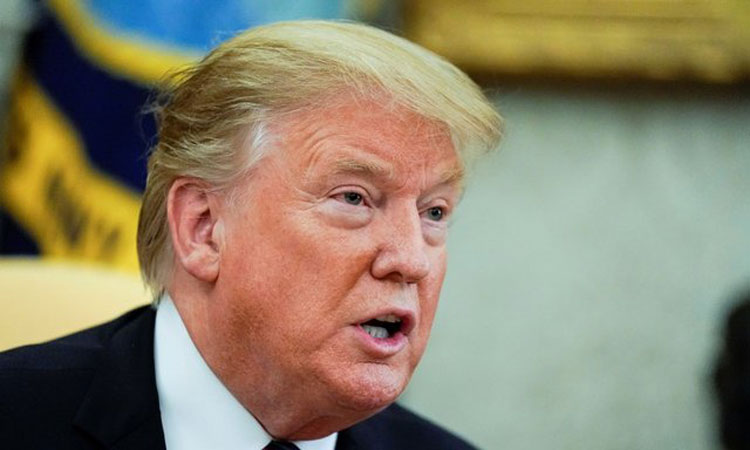 Trump talks to reporters during a meeting with Slovakia's PM Peter Pellegrini in the Oval Office at the White House. File photo. Reuters

North Korean missile launches over the past week have not affected Donald Trump’s relationship with Kim Jong Un, the US president said on Friday, in a change of course after initially expressing his dissatisfaction.

The North had not launched any missiles since November 2017, shortly before once reclusive Kim embarked on diplomatic overtures.

“I don’t consider that a breach of trust at all. And, you know, at some point I may. But at this point no,” Trump said in an interview with Politico.

“These were short-range missiles and very standard stuff. Very standard.”

Twenty-four hours earlier, however, Trump showed his irritation and impatience on an issue where he hopes to succeed while all his predecessors — Republicans and Democrats — have failed.

“Nobody’s happy about it,” he told reporters, in reaction to the launches.

“We’ll see what happens,” Trump added. “I know they want to negotiate, they’re talking about negotiating. But I don’t think they are ready to negotiate.”

Will the US president at some point lose faith in Kim? He has met twice with the North Korean leader and claimed that the two have a special friendship and even “love.”

“I mean it’s possible that at some point I will, but right now not at all,” he told Politico.

The first face-to-face historic meeting between the two men in June 2018 in Singapore produced only a vague statement about denuclearization, allowing both sides to make very different interpretations of it.

February’s second summit, in Hanoi, broke up without a deal after they failed to agree on what Pyongyang would be willing to give up in exchange for sanctions relief.

Since then, Kim has accused Washington of acting in “bad faith” and given it until the end of the year to change its approach.

North Korea’s Rodong Sinmun newspaper, the mouthpiece of the ruling party, devoted its entire front page and half of page two to the launch on Friday, with 16 pictures, the main one of Kim watching the launch from a camouflaged shelter.

Despite recent threats by the North to seek a new path, the nature and presentation of the two recent launches demonstrate that Pyongyang does not intend to walk away from talks any time soon, analysts say.

Signatories included the United States and South Korea, as well as nations in Asia, Latin America, Africa and Europe.

Russia and China, supporters of Pyongyang, did not sign the document drafted by France.

According to a diplomatic source, about 15 countries asked to sign on to the request for North Korean disarmament after the new missile firings.