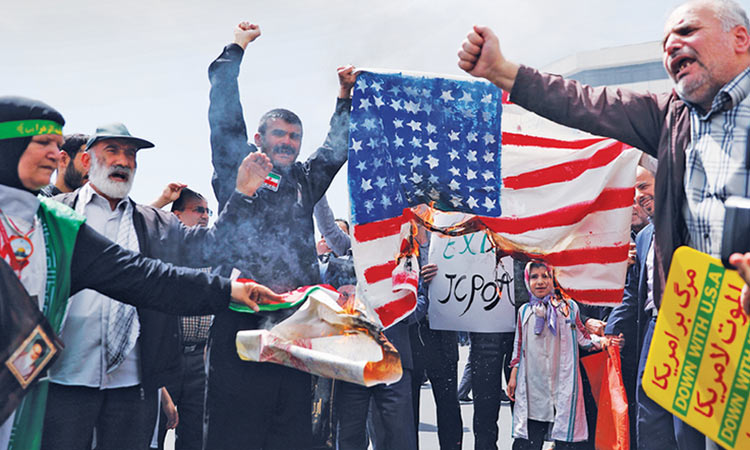 Iranians raise slogans during an anti-US rally in Tehran on Friday. Associated Press

Iran’s Revolutionary Guards said on Friday Tehran will not negotiate with the United States and denied any US attack was likely, a day after US President Donald Trump urged talks and said he could not rule out a military confrontation.

Trump on Thursday urged Iran’s leadership to sit down and talk with him about giving up Tehran’s nuclear programme and said he could not rule out a military confrontation given the heightened tensions between the two countries.

“No talks will be held with the Americans and the Americans will not dare take military action against us,” Yadollah Javani, the Guards’ deputy head for political affairs, was quoted as saying by Tasnim. “Our nation ... sees America as unreliable.”

Thousands of Iranians took part in state-sponsored marches on Friday to voice support for the government’s move on Wednesday to scale back curbs to its nuclear programme under a 2015 deal with world powers, and threatened to do more if signatories did not shield it from US sanctions.

State television showed thousands marching after Friday prayers in Tehran and said similar marches were held across the country. “America should know, sanctions have no effect!” chanted the demonstrators, many of whom carried signs reading “Down with USA.”

Trump, who last year pulled Washington out of the Iran nuclear deal and reimposed sanctions on Tehran, has expressed a willingness to meet Iranian leaders in the past to no avail and renewed that appeal in talking to reporters on Thursday.

Asked about Trump’s comments, Iran’s ambassador to the United Nations Majid Takht Ravanchi said Iran had been talking with the six powers, including the United States, within the framework of the nuclear deal.

“All of a sudden he decided to leave the negotiating table. ... What is the guarantee that he will not renege again?” Takht Ravanchi said in a US television interview.

He dismissed US allegations of an Iranian threat as “fake intelligence” and said they were “being produced by the same people who in the run-up to the US invasion of Iraq did the same.”

Trump was asked by reporters whether there was a risk of military confrontation with the US military presence in the area. “I guess you could say that always, right? I don’t want to say no, but hopefully that won’t happen. We have one of the most powerful ships in the world that is loaded up and we don’t want to do anything,” he said.

The media officer at Al Udaid air base, near Doha, did not immediately respond to a phone call and email requesting comment and details about the arrival of the B-52 bombers. CENTCOM is responsible for US military operations in the Middle East and Afghanistan.

American B-52 Stratofortress bombers sent to the Middle East over what Washington describes as threats from Iran have arrived at a US base in Qatar, US Central Command (CENTCOM) said.

The US military said on Tuesday that a number of B-52 bombers would be part of additional forces being sent to the Middle East to counter what the Trump administration says are “clear indications” of threats from Iran to US forces there.

Iran has dismissed the new US deployments, including of an aircraft carrier, as old news announced now to intimidate it through “psychological warfare,” at a time when Washington is also tightening financial sanctions. The USS Abraham Lincoln is replacing another carrier rotated out of the Gulf last month.

A picture taken by USAir Force personnel stationed in Al Udaid air base and posted on the CENTCOM website showed two aircraft. The caption said: “B-52 Arrival. US B-52H Stratofortress aircraft assigned to the 20th Expeditionary Bomb Squadron are parked on a flight line May 8, 2019.”

Washington has tightened sanctions on Iran this month, eliminating waivers that had allowed some countries to buy its oil, with a goal of reducing Tehran’s crude exports to zero.

Iran has responded by scaling back some curbs on its nuclear programme, although it remains compliant with a deal to restrict its nuclear activity which Washington abandoned a year ago.

A senior Iranian cleric said in a Friday prayers sermon that the United States’ navy fleet could be “destroyed with one missile.