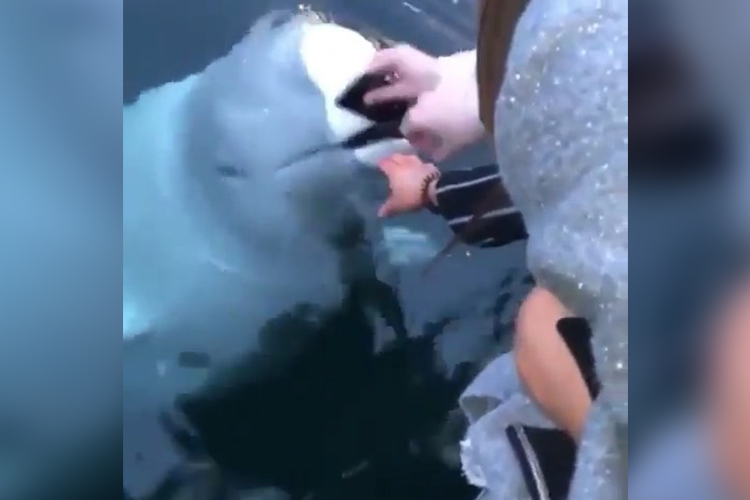 A video grab shows the whale with the phone.

A beluga whale thought to be a Russian spy has found online fame again. The whale returned an iPhone to its owner after it was dropped into the water. The video went viral with the phone owner’s startled reaction on a tourist boat off the Norwegian coast.

Recently, the beluga whale was found with a tight harness that appeared to be Russian made which alarmed Norwegian officials and prompted speculation that the animal might have come from a Russian military facility.

But more than a week after it was first spotted by fishermen in the Arctic waters off the coast of northern Norway its origin remains unknown.

When Jorgen Ree Wiig, a marine biologist working with the Norwegian Directorate of Fisheries tracked down the mammal with the help of a fisherman and two colleagues on April 26, they managed to remove an obviously man-made harness attached to it.

The harness had a mount suited for an action camera and the text "Equipment St. Petersburg" printed on the plastic clasps.

Wiig told reporters on Friday he believed the whale could have come from neighbouring Russia, where he believed it might have escaped an enclosure.

Well so many speculations lead to espionage, but the whale is surely delight people all over the world.