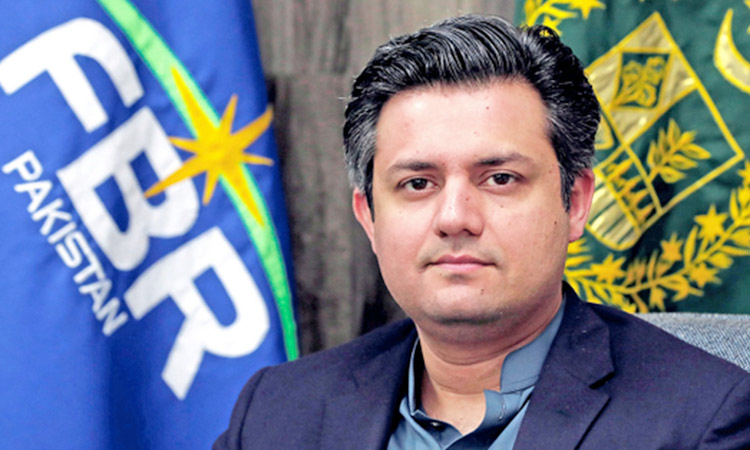 Hammad Azhar, Minister of State for Revenue, is seen at his office in Islamabad. File

Tariq Butt/NNI
Minister of State for Revenue Hammad Azhar on Thursday said that talks with International Monetary Fund (IMF) are at the final stage and its details would soon be shared with the parliament.

The senate was informed that remittances this year will increase to $22 billion breaking the stagnant mode of the previous years.

Azhar told the upper house during Question Hour that exports have increased to $25 billion and the government is committed to enhance them further to strengthen economy.

He said work on NFC Award is underway and the government is committed to provide due share to the erstwhile FATA.

Responding to a question regarding inflation, the Minister of State said inflation rate in April reduced to 8.8 per cent from 9.4 per cent in March. He said the inflation rate in the first eight months of PTI government is the lowest as compared to the corresponding period in the last two governments.

About reforms in Federal Board of Revenue (FBR), he said Internal Audit Wing of the department will be made autonomous to remove the conflict of interest within the organisation.

The minister said findings of Egmont Group, an informal network of 159 financial intelligence units to control money laundering, will be incorporated in Anti-Money Laundering Act. He said after incorporating findings of the group Pakistan will be in a strong position to become member of the group, and this membership will enable Pakistan to have technical assistance in forensic and tracing of money trails data.

Minister for Planning and Development Reforms Khusro Bakhtyar told the house that Gwadar will be connected with the national grid at a cost of Rs17.5 billion. He said consensus has been developed with the stakeholders on Gwadar master plan. He said regional equalisation strategy is the agenda of government to bring less developed areas at par with rest of the country.

Bakhtyar said in next PSDP, Balochistan will be given its due share which was ignored by the previous governments. He said Rs8billion will also be allocated for completion of the remaining work of Kachhi Canal.

Minister for Parliamentary Affairs Azam Khan Swati told the house that two new automobile companies will start their production in January and July next year. He said with the arrival of new companies a competitive environment will flourish.

Meanwhile, 21 days after Asad Umar’s removal as the finance minister, Prime Minister Imran Khan has now decided to appoint him as chairman of the National Assembly’s Standing Committee on Finance, which is totally an insignificant office compared the one he held before his sacking.

The decision was taken at a meeting of the parliamentary party of the ruling PTI during which party leaders expressed concern over the appointment of technocrats and non-elected members on key positions.

The finance committee is presently being headed by PTI lawmaker Faizullah from Faisalabad.

Under the rules, the PTI will have to withdraw one of its members from the committee to accommodate Umar and also seek Faizullah’s resignation as its chairman. After Umar’s inclusion in the forum, its members will be required to elect a new chairman which will merely be a formality, because as per an understanding between the government and the opposition, the committee will be headed by a PTI member.

The prime minister told the meeting that he would attend the session of the National Assembly at least once a week to answer opposition’s questions.

“It was my choice to become chairman of the Standing Committee on Finance,” Umar later said.

He said he could not attend the parliamentary party meeting, but he had heard that some party leaders asked the prime minister to bring him (Umar) back and give him some responsibility he deserved.

“In fact I asked the prime minister for the chairmanship of this committee because I have some expertise in financial matters which I want to utilise,” Umar said, adding that he has twice met Imran and thanked him for reposing confidence in him by deciding to appoint him chairman of the committee.

After meeting the prime minister a day earlier, Umar had stated that he had been offered a ministry, but he decided not to become a part of the cabinet.