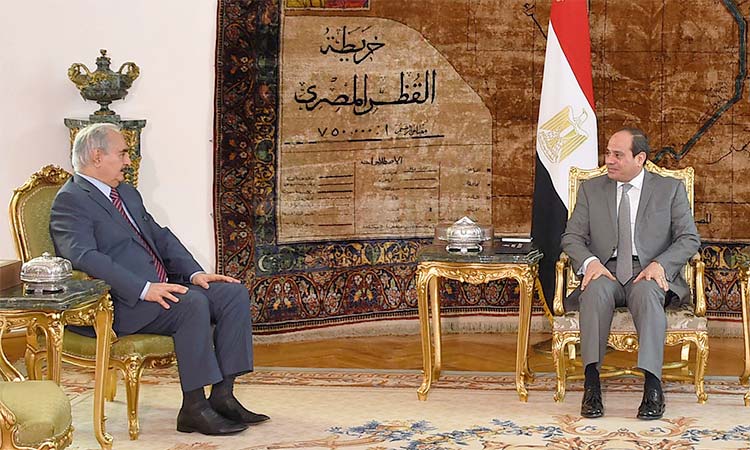 Libyan commander Khalifa Haftar was in Cairo on Thursday for the second time since he launched a military offensive on his country’s capital, the Egyptian presidency said.

Haftar has gained the ardent support of Egyptian President Abdel Fattah Al-Sisi for his assault on Tripoli, where Libya’s UN-recognised government sits.

During their latest meeting in Cairo, Sisi backed the role of Haftar’s forces “to restore the pillars of legitimacy and create an environment conducive to reaching political solutions.” The Egyptian president also heralded Haftar’s drive to push back against “extremist militias”, according to a presidential statement.

More than 440 people have been killed in the fighting and thousands wounded, according to the World Health Organization.

Thursday’s meeting comes as his Libyan rival Fayez al-Sarraj, head of the Tripoli-based Government of National Accord, continued a European tour to shore up support.

Sarraj held meetings Thursday with the British government, which stressed there was “no military solution” to the Libya crisis and pushed for a ceasefire. The London talks followed Sarraj’s visit to Rome, Berlin and Paris − where President Emmanuel Macron reiterated his support for the Tripoli government.

Three people were killed on Thursday in a suspected hit-and-run attack by Daesh militants on a town in southern Libya, residents and a military official said, the second such attack within days.

In the capital Tripoli, three rockets hit a western suburb overnight close to the heavily fortified UN compound but otherwise there was less fighting than last week as life slowed down with the start of the Muslim Holy Month of Ramadan.

Gunmen stormed the southern town of Ghadwa and opened fire before retreating back into the desert, residents said.

The attack came after nine soldiers were killed on Saturday in an attack claimed by Daesh on a training camp for the eastern Libyan forces of commander Haftar.

Haftar’s Libya National Army (LNA) took control of the south earlier this year. But he has concentrated his forces in the northwest, where they have been embroiled in a month-long battle for Tripoli with fighters allied to the divided country’s internationally recognised government, which is based there.

Islamic State is active in the south, having retreated there after losing its stronghold in the central city of Sirte in December 2016.

The LNA, whose power base is in eastern Libya, has been unable to breach the southern defences of Tripoli forces and fighting has diminished since the start on Monday of Ramadan,.

Around three rockets hit the western Janzour suburb targeting a police station and factory near the U.N. compound, a resident said.

The United Nations has failed to broker a ceasefire after the offensive took it by surprise. Its special envoy Ghassan Salame has mostly stayed on the ground but the Libya mission has greatly reduced staffing levels, U.N. officials say.

One senior health worker was severely wounded as he travelled in an ambulance car in a southern Tripoli district that was reportedly attacked by LNA-affiliated fighters, the UN humanitarian agency OCHA said in a statement.

Separately, two boats carrying 214 migrants were intercepted by the Libyan coast guard late on Wednesday and taken back to the shore, the U.N. migration agency said. “As clashes continue in the capital, we are concerned about the return and arbitrary detention of migrants in #Libya,” the International Organization for Migration said in a tweet.

On Wednesday, the independent AlarmPhone website, which provides a hotline for boat people in distress, said it was in touch with a boat with about 150 people on board, who were using their clothes to plug a hole and panicking.

The western Libyan coast is a major departure point for mainly African migrants fleeing conflict and poverty and trying to reach Italy across the Mediterranean Sea with the help of human traffickers. Smuggling activity had slowed when forces loyal to Haftar launched their offensive on Tripoli, but human trafficking has picked up again since last week.