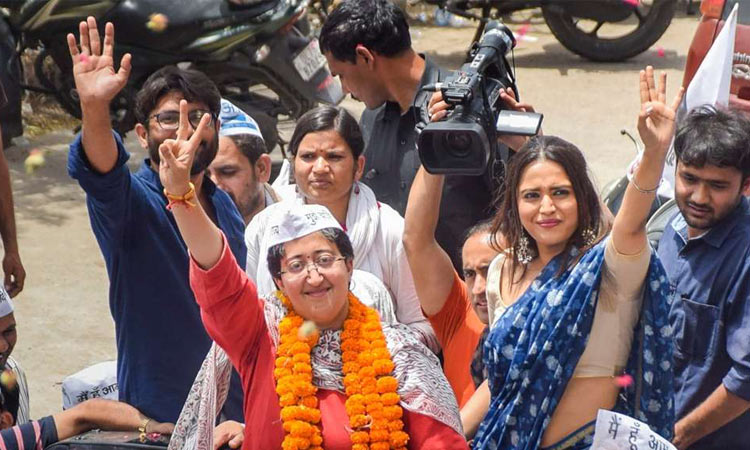 Atishi Marlena waves to supporters during a rally in New Delhi. File

An Oxford-educated candidate contesting India's election broke down on Thursday after a savage anonymous pamphlet accused her of being a prostitute and of having sex with a fellow teacher.

An emotional Atishi Marlena, a candidate at national level in Sunday's vote, told a news conference that the accusations were "obscene and derogatory."

The pamphlet said that as a primary school teacher, Atishi "was caught red handed while having sex and in a compromising position with another teacher."

It said she was married to a Christian — "i.e. a Beef Eater" — and was pregnant by an illegitimate member of a low-caste, and therefore a "prostitute."

Atishi, a former Rhodes scholar to Britain's Oxford University, is standing as a candidate for the Aam Aadmi Party (AAP), which won control of Delhi in state elections in 2015 on an anti-corruption platform.

Both Atishi and AAP head and Delhi chief minister Arvind Kejriwal accused Gautam Gambhir, a former international cricketer and candidate for the Bharatiya Janata Party (BJP), of being behind the pamphlet.

"I declare that if its proven that I did it, I will withdraw my candidature right now," wrote Gambhir.

"Never imagined Gautam Gambhir to stoop so low," chief minister Kejriwal had earlier tweeted. "Atishi, stay strong. I can imagine how difficult it must be for u. It is precisely this kind of forces we have to fight against."

The row comes weeks after Atishi accused Gambhir of possessing two voter identification cards and appealed to election authorities to disqualify him.

Gambhir had previously courted controversy with comments on the restive Kashmir region when he called for "evicting and killing" those who want to secede from India.

Delhi votes Sunday on the penultimate day of India's almost seven-week-long election, which wraps up on May 19.

Results are due four days later.