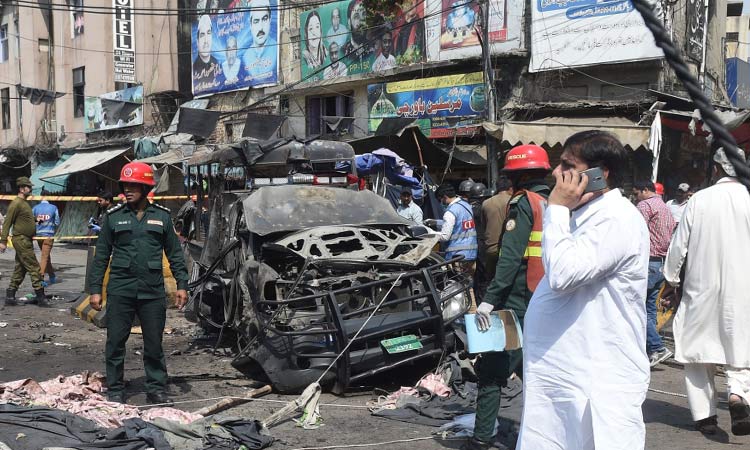 Security officials examine the site of a bomb blast outside a Sufi shrine in Lahore on Wednesday. Arif Ali / AFP

A suicide blast at one of Pakistan's oldest and most popular Sufi shrines (Data Darbar) killed at least 10 people and wounded 24 in the eastern city of Lahore on Wednesday, police said, in an attack claimed by the Pakistani Taliban.

The blast — which a faction of the militant group claimed by email — occurred near the entrance gate for female visitors to the 11th-century Data Darbar shrine, one of the largest Sufi shrines in South Asia, as the country marks the Holy Month of Ramadan.

Wreckage of vehicles littered the pavement near the shrine as first responders rushed to the scene and armed security forces fanned out in the area.

"As we crossed the road a blast took place in front of us," witness Ritat Shahid told AFP.

She described seeing pieces of flesh fall in front of her, and added that the blast "sounded so big that we felt like our ears will burst."

The emergency room at the Mayo Hospital in Lahore was crowded with the wounded, and people searching for loved ones, an AFP reporter saw.

Among them was Azra Bibi, whose son Muhammad Shahid cares for visitors' shoes — which must be removed before entering. He has been missing since the blast, she said.

"They are not Muslims," she told AFP, referring to the attackers. "They even targeted worshippers."

The shrine has long been home to colourful Sufi festivals and a prime destination for the country's myriad Muslim sects, making it a soft target for militant attacks.

It has been targeted previously, in a 2010 suicide attack, which killed more than 40 people.

Since then the area has been increasingly hemmed in by heavy security, with visitors forced to pass through several layers of screening before they can enter the complex.

Sufi worshippers, who follow a mystical strain of Islam, have frequently been the target of bloody attacks in Pakistan by militants — including Daesh group — who consider their beliefs, and rituals at the graves of Muslim saints, as heresy.

Senior police official Muhammad Ashfaq told a press conference that the security personnel at the shrine were targeted.

The Data Darbar complex contains the shrine of Saint Syed Ali bin Osman Al-Hajvery, popularly known as Data Ganj Bakhsh. Originally from Afghanistan, he was one of the most popular Sufi preachers on the subcontinent.

Tens of thousands of pilgrims visit the shrine each spring to mark his death anniversary, while it is also crowded weekly with worshippers listening to qawwali, a traditional form of Islamic devotional music. 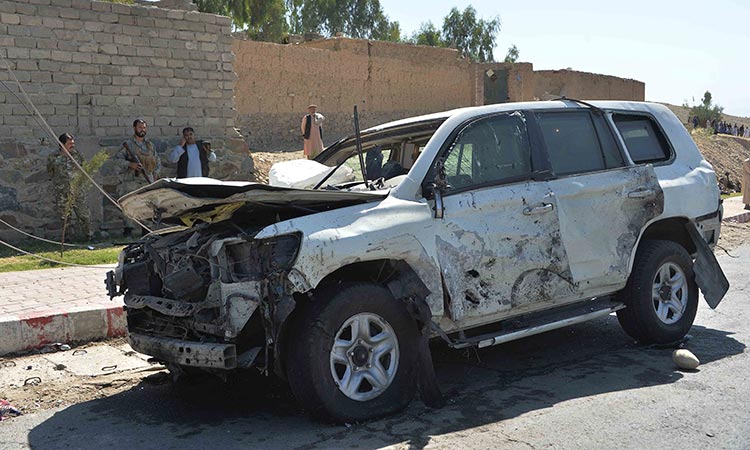