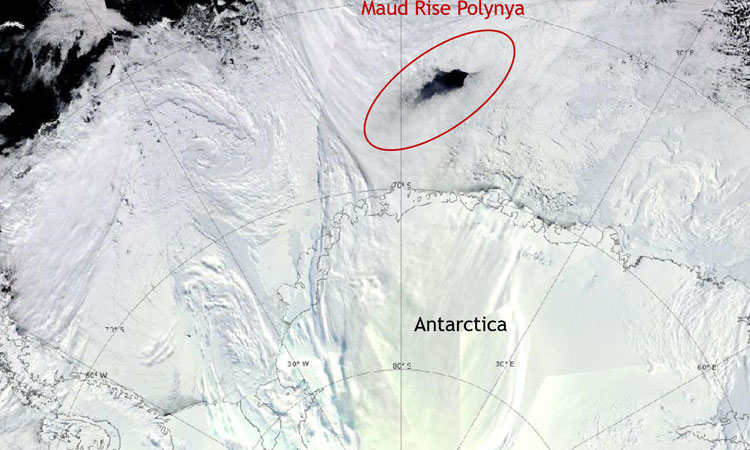 A study led by NYU Abu Dhabi Institute (NYUAD) Research Scientist Diana Francis and co-authored by Clare Eayrs and David Holland, from NYUAD’s Centre for Global Level Sea Change (CSLC) and Juan Cuesta of the University of Paris-East, have helped to unravel the mystery surrounding the occurrence of a mid-sea Polynya — a body of unfrozen ocean — that appeared within the sea-ice pack during the Antarctic winter in mid-September 2017.

The Centre combines observations and computer models to understand past, and project future, sea-level rise.

The Maud-Rise Polynya was spotted in the centre of a sea-ice pack in Antarctica's Lazarev Sea, causing researchers to question how this phenomenon occurred during Antarctica’s coldest, winter months when sea ice is at its thickest. Due to the difficulty of accessing the location, NYUAD scientists used a combination of satellite observations and reanalysis data to discover that cyclones, which can be as intense as category 11 on the Beaufort Scale, and the strong winds that they carry over the sea-ice pack cause the ice to shift in opposite directions. This then leads to the appearance of the Polynya.

Satellite observations of the Antarctic ice began in the 1970s, and a much larger Polynya had been spotted in the same location in 1974, with smaller Polynya events occasionally occurring since then. The phenomenon has intrigued scientists ever since it was first recorded.

At the time of the discovery in 2017, the Maud-Rise Polynya was approximately 9,500 square kilometres large (equivalent to three times the landmass of the Emirate of Dubai), and grew by over 700 percent to 800,000 square kilometres within a month. Eventually, the Polynya merged with the open ocean once the sea ice started to retreat at the beginning of the austral summer.

Holland, who has worked on the oceanographic aspects of the Polynya, remarked that "Previously we have shown that the large Maud Rise Seamount, which sits on the sea floor beneath this Polynya, preconditions the manner by which warm, deep water can rise up to the surface of the ocean, thus keeping the ocean surface warm and preventing the formation of sea ice. It is an unstable oceanographic situation and a large atmospheric cyclone can trigger the opening of a Polynya over the seamount as we have seen here. The Polynya can then be sustained for months, long after the cyclone has passed, by the ocean instability that continues to cause the rise up of warm, deep water."

"Once opened, the Polynya works like a window through the sea ice, transferring huge amounts of energy during winter between the ocean and the atmosphere," said Francis. "Because of its large size, a mid-sea Polynya is capable of impacting the climate regionally and globally as it modifies the oceanic circulation. It is important for us to identify the triggers for their occurrence to improve their representation in models and their effects on climate."

"Given the link between Polynya and cyclones we demonstrated in this study, it is speculated that Polynya events may become more frequent under warmer climate because these areas will be more exposed to more intense cyclones. Previous studies have shown that under a warmer climate, polar cyclone activity will intensify, and extratropical cyclone tracks will move toward Antarctica which could decrease the sea-ice extent and make Polynya preconditioned areas closer to the cyclones formation zone," Francis added.