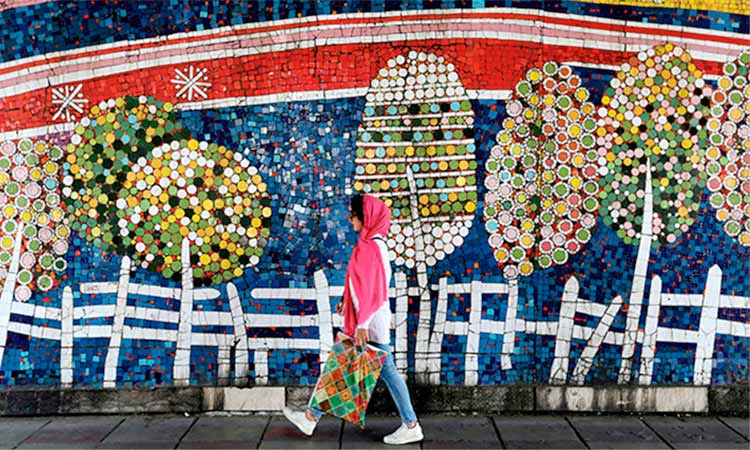 An Iranian woman walks past a graffiti in Valiasr Street in Tehran on Wednesday. Agence France-Presse

Iran said it was responding to the sweeping unilateral sanctions that Washington has reimposed since it quit the agreement one year ago, which have dealt a severe blow to the Iranian economy.

It said it would stop implementing some of the restrictions it had agreed with immediate effect.

Tehran said it would abandon more if the remaining parties to the agreement -- Britain, China, France, Germany and Russia -- failed to start delivering on their commitments to sanctions relief within 60 days.

President Hassan Rouhani underlined that the ultimatum was intended to rescue the nuclear deal from his US counterpart Donald Trump who has repeatedly called for it to be scrapped since he pulled out on May 8, 2018.

“We felt the (deal) needed surgery and that the year-long sedatives have not delivered any result. This surgery is meant to save the (deal) not destroy it,” Rouhani said at a cabinet meeting broadcast live on state television.

Robert Kelley, a former UN nuclear inspector now with the Stockholm International Peace Research Institute, said the commitments Iran was dropping had no bearing on its ability to develop an atomic bomb. He said Iran was simply seeking to “save face” after “striking a deal which was not respected by the other side.”

Under the landmark deal agreed by Trump’s predecessor Barack Obama, the parties to the agreement were supposed to lift nuclear-related sanctions on Iran in return for it reining in its activities to ease fears it was seeking the capability to produce an atomic bomb.

But the promised sanctions relief has failed to materialise as European and Asian banks and oil companies have moved swiftly to abide by the renewed US sanctions for fear of financial or commercial repercussions.

Rouhani slammed European countries for seeing the US as the world’s “sheriff” and said this keeps them from making “firm decisions for their own national interests.”

“You have responsibilities, too for keeping your youth away from drugs, the flood of immigrants and other cooperation Iran has had with you so far. If this trend continues, the cooperation will cease.”

The three European parties to the deal -- Britain, France and Germany -- tried to save the accord with a trade mechanism meant to bypass reimposed US sanctions, but their attempt was dismissed by Iran’s supreme leader Ayatollah Ali Khamenei as a “bitter joke.”

Foreign Minister Mohammad Javad Zarif, who was in Moscow on an official visit, accused European governments of not fulfilling their obligations under the nuclear deal.

“Our friends in Russia and China maintained very good relations with us in this year but the rest of the participants did not meet any of their obligations,” Zarif said.

“We as Europeans, as Germans, will play our part and we expect full implementation from Iran as well,” Chancellor Angela Merkel’s spokesman Steffen Seibert said.

China underlined that it “resolutely opposes” the unilateral US sanctions on Iran but called on all parties to uphold the nuclear deal. Russia said it remained committed to the nuclear deal and denounced what it called “unreasonable pressure” on Iran.

Iran’s Supreme National Security Council said it no longer considered itself bound by the agreed restrictions on stocks of enriched uranium and heavy water.

It said after 60 days, it would also stop abiding by restrictions on the level to which Iran can enrich uranium and modifications to its Arak heavy water reactor that were designed to prevent the production of plutonium.

Uranium enriched to much higher levels than Iran’s current stocks can be used as the fissile core of a nuclear weapon, while heavy water is a source of plutonium which can be used as an alternative way to produce a warhead.

The council called for swift action by the remaining parties to the deal, warning time was running out.

“The window which is now open for diplomacy will not remain so for long, and the responsibility of the (deal) failing and any possibile consequences are completely on the US and the remaining parties,” it said. 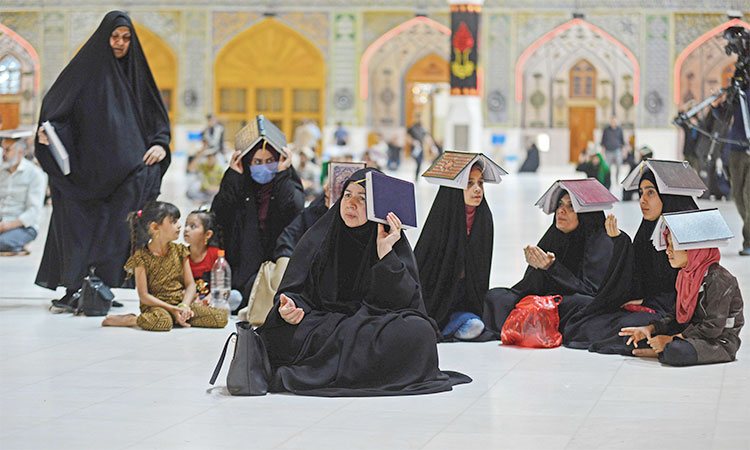