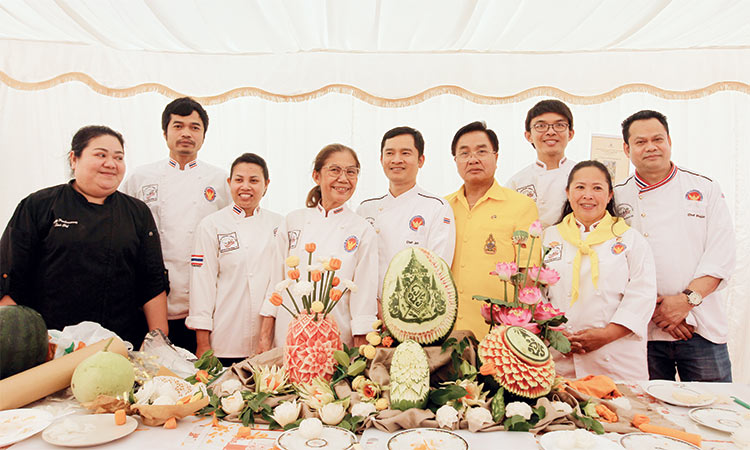 Members of the 130-strong Thai Culinary Chefs in Dubai association at the “Thai-ness Exhibitions” in the Royal Thai Consulate General in Jumeirah, Dubai. John Varughese/Gulf Today

Either individually, as families or in groups, they witnessed at 6 p.m. the delayed telecast of the early afternoon occasion on the wide screen, set up at the front yard of the Royal Thai Consulate General in Jumeirah, Dubai, bedecked with the amber and bumblebee shades of yellow.

Among them were the Devlin family namely Grant from the UK, Arunee from Beungkhan in northeast Thailand, and their children five-year-old Chalice and two-year-old Edward.

They attended the ceremonies because it was one significant historic occasion which should neither be dropped nor ignored. They too wanted their children become part of it even though they were overseas.

“We have pictures that will long be cherished,” said Arunee.

Grant interjected: “Our children are holders of the Thailand passport. They must be part of this very special affair.”

Following ancient traditions when the Southeast Asian kingdom was known as Siam, yellow was the designated colour of the day for the new king was born on a Monday on July 28, 1952.

On the other hand, newly-assigned Consul General Chairat Sirivat, whose last posting was as minister and deputy chief of mission at the Royal Thai Embassy in Singapore, and senior officials of the diplomatic mission, were garbed in their official white uniform with full regalia.

As viewed from the delayed telecast, government officials who attended the formalities at the Grand Palace in Bangkok wore the same attire.

Following closely the details on the wide screen, the community curtsied a number of times. Sirivat went up the stage at least twice for rituals before the huge golden-framed official photograph of King Rama X.

Earlier interviewed, Sirivat said: “We are proud to be the subjects of His Majesty, the King Rama X.”

The 2 p.m. to 5:30 p.m. “Thai-ness Exhibition” at the diplomatic mission garden and which consisted of Thai Massage, Thai Boxing, Thai Fruit Carving, and Thai Dessert and Papaya Salad sessions were held because they take pride in their heritage.

Similar exhibitions are part-and-parcel of celebrations because it has become a part of their psyche as a people to look back and remind themselves of how the late King Rama IX (King Bhumibol Adulyadej) and his “Sufficiency Economy Philosophy”—with the help of Queen Sirikit, King Maha Vajiralongkorn and other royal family members—have helped ingrain in themselves self-worth and self-dignity through innumerable sustainable development programmes and projects.

“We have progressed and developed as a nation. We are the second largest economy in Southeast Asia. We are sharing with other countries what we have achieved like the Artificial Rain of King Rama IX,” Sirivat said.

The diplomat of 28 years beamed with smile when he said: “Our new king vowed to follow the footsteps of his father, King Rama IX, according to the rule of law. He continues the royal projects even in the (far-flung) rural areas for our continuous progress and prosperity. We revere him.”

Sharing that the Thai Culinary Chefs Association in Dubai had fruit-carved the new personal emblem of the new king as part of the exhibition, Sirivat explained that the royal four-day ceremonials were steeped with age-old traditions.

Installations of the royal birth, life and advocacies of King Maha Vajiralongkorn, on the grounds of the diplomatic mission, revealed that the May 2 to 6 rites were patterned from the long-held royalty Brahminic and Buddhist traditions of the 13th century Sukhothai, 14th century Ayutthaya, and 18th century Rattanakosin kingdoms, down to the present Chakri Dynasty. 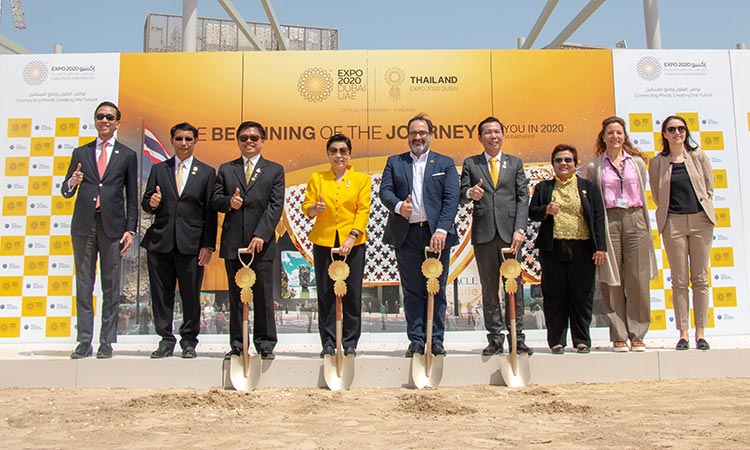