Pence to offer 'carrots' to Venezuela military, warnings to judges 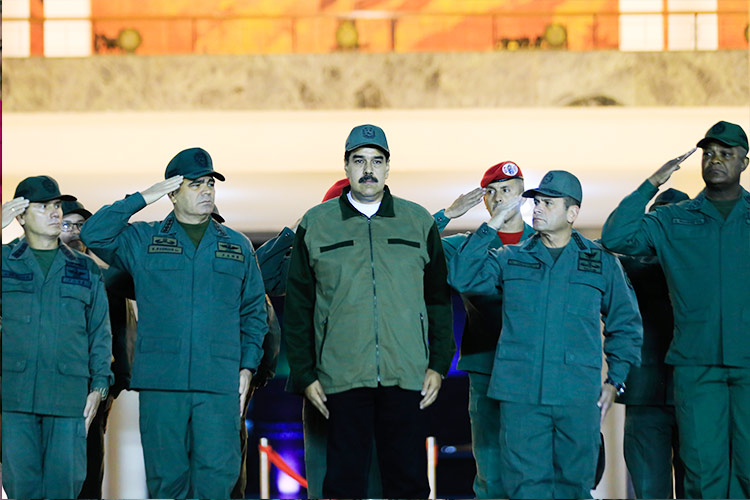 US Vice President Mike Pence is set on Tuesday to offer new incentives to Venezuela's military to turn against President Nicolas Maduro, responding to an attempted uprising that fizzled out last week, a senior administration official told Reuters.

In a speech to the Americas Society at the State Department, scheduled for 3:25 p.m. (1925 GMT), Pence will also warn that the United States will soon move to sanction 25 additional magistrates on Venezuela's supreme court, the official said on Monday, speaking on condition of anonymity.

Pence will also offer assistance for refugees who have fled the country, and an economic aid package contingent on a political transition, according to the official.

Pence's speech will be the first look at the Trump administration's recalibrated strategy following massive street protests last week led by Juan Guaido, the opposition leader backed by the United States and most other Western countries.

A man carries a wheelbarrow across the Tachira River near the Colombian-Venezuelan border. Reuters

Journalists wait outside a medical center in Caracas. AFP

A Secret Service officer checks to make sure no one is being harmed an entrance to the Venezuelan Embassy in Washington. AFP

People holding flags of Venezuela and Nicaragua demonstrate against the countries' governments. AFP

A general view of Caracas. AFP

Guaido had described the protests as the start of his "final phase" to oust Maduro, but mass military defections failed to come to fruition.

President Donald Trump has invested considerable political capital in the diplomatic and economic intervention in the Venezuela crisis.

Although Guaido's attempted uprising failed to immediately dislodge Maduro, it exposed new fissures within the country, the official said.

"A week before last, all the media - including you guys, everybody - was writing about how there's no way forward, complete stalemate," the official said.

"Suddenly last week, everyone woke up."

Maduro - who has said Guaido is a puppet of Washington - has sought to show that the military remains on his side, but opposition leaders and U.S. officials have said that support is tenuous.

"They sat back in the barracks and they're there, but they don't want to be identified as the institutional source of repression," the official said.

Pence will offer new "carrots" to the Venezuelan military, the senior official told Reuters, declining to provide details of the incentives ahead of the speech.

"He'll be showing where the opportunities lay if people do the right thing moving forward," the official said.

“All 32 magistrates in the TSJ are going to sink or swim together.

Pence is also set to outline new assistance for Venezuelans who have fled the oil-rich OPEC member, which has been plagued by hyperinflation and shortages of food, water, power and medicine - and a "Day One" economic assistance plan for Venezuela contingent on Maduro's departure, the official added.

The vice president in addition will deliver a "warning shot" to magistrates on Venezuela's supreme court. The Treasury Department sanctioned the court's president, Maikel Moreno, in 2017 and the seven principal members of its constitutional chamber - and is now preparing to sanction the 25 remaining members of the court, the official said.

"We feel like that's where the pressure needs to be," according to the official.

"All 32 magistrates in the TSJ are going to sink or swim together," the official said, using the acronym for Tribunal Supremo de Justicia.

The court would be responsible for signing off on any warrant for an arrest of Guaido - a move the U.S. official emphasized would have severe consequences.

"All those cases are being investigated," Saab said in a television interview.

A small number of military personnel on April 30 joined opposition leader Juan Guaido outside an air base in the capital Caracas calling on those inside to join the rebellion.

The insurrection quickly petered out, though, and 25 rebel soldiers sought refuge in the Brazilian embassy.

Saab, a Maduro loyalist, confirmed that 18 arrest warrants were issued against "civilians and military plotters," although he gave no names.

In an interview with AFP on Monday Guaido blamed the failure on unkept promises by other members of the armed forces.

Maduro has threatened to go after "traitors" after crisis-wracked Venezuela's military leadership reaffirmed its loyalty to the socialist president.

The administration also continues to work on other responses to increase financial pressure on Maduro, including "secondary sanctions" on companies from other countries that do business with Venezuela, and additional shipping sanctions for oil, the official said.