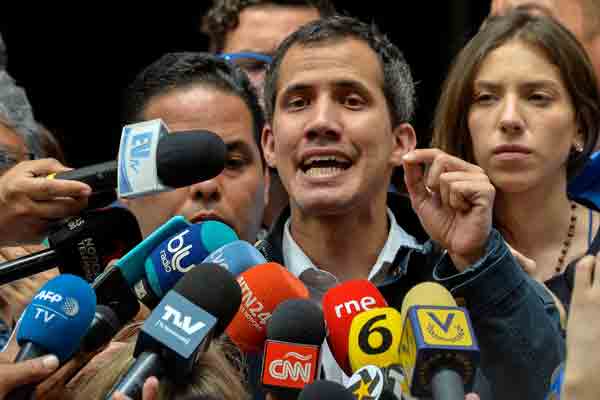 Venezuelan opposition leader Juan Guaido said on Monday that backers who had pledged support for his abortive uprising last week had “failed to follow through” to dislodge President Nicolas Maduro.

But that “doesn’t mean that they won’t do it soon,” Guaido said in an interview in Caracas.

Guaido, recognised as interim president by more than 50 countries, said it was “obvious today, there is widespread discontent from which the armed forces aren’t immune.” “There have been discussions... with civil and military officials who are ready to take the side of our constitution,” he said.

“I’m very optimistic given that we are very close to achieving change in Venezuela.” The 35-year-old National Assembly chief has branded Maduro a usurper over his controversial re-election last year, and in January declared himself acting president, plunging Venezuela into a political crisis that deepened its already grave economic woes.

But Maduro has held firm, bolstered by the continued support of the powerful armed forces.

Guaido, however, expressed the hope that the army would eventually come on board.

“We are waiting for many more to join in expressing their discontent and to participate in ‘Operation Freedom,’” he said.

Of those that did, 25 soldiers sought refuge in the Brazilian embassy later in the day.

“Today all that needs to happen is for the armed forces and certain (public sector) employees to overcome their fear,” said Guaido.

Maduro was getting “weaker and weaker” after years of protests against his regime, Guaido said, painting a picture of a leader surrounded by the last vestige of support in his Miraflores presidential palace.

“They say that Maduro is in Miraflores, but they also say that he’s in a bunker with a main security ring composed of Cubans and a second ring made up of soldiers from the Casa Militar,” Guaido said, referring to Venezuela’s elite presidential protection corps.

“He no longer trusts even in his high command, he doesn’t even have any trust in his environment.” The attempted uprising set off two days of violent clashes between security forces and protesters that left five people dead, dozens injured and more than 233 arrested.

Guaido has tried to keep up the pressure with massive street protests, but his latest call for demonstrations on Saturday drew only several hundred people.

He rejected suggestions that his opposition movement was flatlining, however.

“On Saturday, I think the protest was fulfilled. A key goal for us was to redirect it toward non-violence,” he said.

Maduro, meanwhile, appeared at a military exercise on Saturday with Defence Minister Vladimir Padrino, who top US officials had said was in on the attempted uprising but backed out.

“I told the generals and admirals yesterday: loyalty, I want an active loyalty,” Maduro said in a speech to some 5,000 troops that was broadcast nationally on radio and television.

Tensions in Venezuela have soared since Guaido invoked the constitution to declare himself acting president.

As major world powers have been drawn in, the US has thrown its support behind Guaido, while China and Russia have backed Maduro.

Washington has repeatedly stated that “all options are on the table,” including military intervention in Venezuela to help Guaido oust Maduro.

Without using such antagonistic language, Guaido said there could be a case to seek “foreign co-operation to overcome the unprecedented crisis Venezuela is going through.” Asked about military intervention, he said only that it was a “controversial option.”

US Vice President Mike Pence is set on Tuesday to offer new incentives to Venezuela’s military to turn against Maduro, responding to an attempted uprising that fizzled out last week, a senior administration official told Reuters.

Pence will also offer assistance for refugees who have fled the country, and an economic aid package contingent on a political transition, according to the official.

Pence’s speech will be the first look at the Trump administration’s recalibrated strategy following massive street protests last week led by Juan Guaido, the opposition leader backed by the United States and most other Western countries.