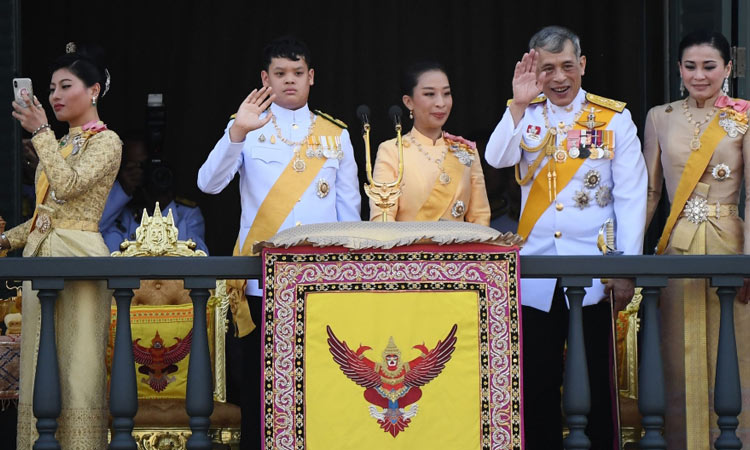 Thai royal family waves from the balcony of Suddhaisavarya Prasad Hall on the final day of coronation in Bangkok on Monday. Agence France-Presse

Thailand's newly-crowned King Maha Vajiralongkorn praised the show of "unity" at his first public address on the final day of an elaborate coronation on Monday, speaking to a sea of supporters and witnessed by the head of the junta that has led the divided country since a 2014 coup.

Walking onto a wooden balcony to the roar of the crowd, Vajiralongkorn said he was "pleased and delighted" with the display.

"I want the unity shown here with this goodwill to be an encouraging sign for everybody, all sides to perform their duties for the prosperity of our country," he said. 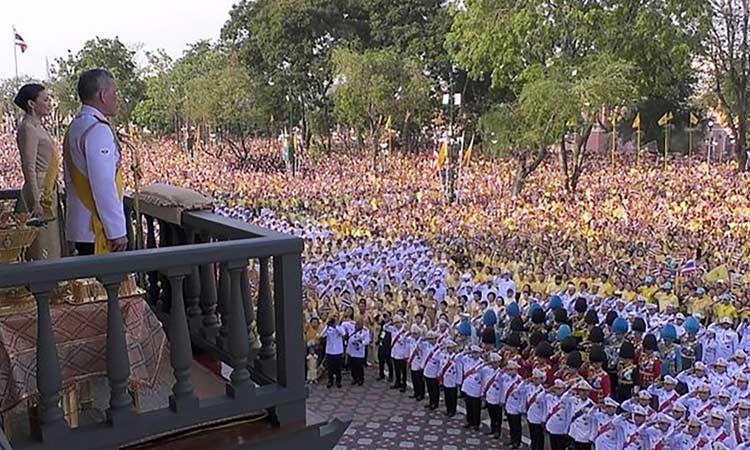 King Maha Vajiralongkorn and Queen Suthida appear on the balcony of the Grand Palace on Monday. AFP

Before the remarks, junta chief Prayut Chan-O-Cha addressed the king from the ground, pledging "loyalty to his majesty and the great Chakri dynasty with our lives."

Vajiralongkorn was accompanied by Thailand's new Queen Suthida, whom he married in a formal ceremony days before the coronation.

Company worker Pramote Mapongtao said he felt "overwhelmed when I saw his majesty standing over there."

He was one of many who braved scorching temperatures, which hovered around 37˚C, causing several faintings.

As darkness fell a coordinated drone show formed an outline of the king's visage in the night sky.

"I want the unity shown here with this goodwill to be an encouraging sign for everybody, all sides to perform their duties for the prosperity of our country

The 66-year-old monarch is the 10th king in the Chakri dynasty and ascended the throne in late 2016 after the death of his beloved father Bhumibol Adulyadej.

Not as well known, Vajiralongkorn spends a great deal of time in Germany and has been divorced three times.

Since becoming king, Vajiralongkorn has made several moves that experts say reinforce the apex role of the monarchy, including bringing the assets of the Crown Property Bureau under his direct control and appointing an army chief from a faction close to the monarchy.

The royal family is shielded by some of the world's harshest lese majeste laws, making any critical discussion about the king all but impossible. But wall-to-wall coverage and social media posts of the ceremony provided rare glimpses into the lives of the ultra-guarded royal family.

After Monday's address, the king stood on the balcony alongside Queen Suthida and his children from three previous marriages.

The moment was captured by his fashion designer daughter Princess Sirivannavari who swivelled around her smartphone, and a video from the balcony quickly found its way onto Twitter.

A boy holds a photo of King Maha Vajiralongkorn before a coronation procession in Bangkok. Navesh Chitrakar / Reuters

Officials arrive outside the Suddhaisavarya Prasad Hall where King Maha Vajiralongkorn grants a public audience to receive the good wishes of the people in Bangkok, Soe Zeya Tun / Reuters

King Maha Vajiralongkorn and Queen Suthida attend the ceremony of Assumption of the Royal Residence inside the Grand Palace. Reuters

King Maha Vajiralongkorn and Queen Suthida appear on the balcony of the Grand Palace. AFP

King Maha Vajiralongkorn annointing his sister Princess Sirindhorn during a coronation ceremony in the Grand Palace in Bangkok. AFP

King Maha Vajiralongkorn walks into a temple during his coronation procession in Bangkok. AFP

King Maha Vajiralongkorn is carried out of the Grand Palace for his coronation procession in Bangkok. AFP

King Maha Vajiralongkorn makes a speech beside Queen Suthida on the final day of his royal coronation on Monday. Jewel Samad / AFP

A woman holds up a portrait of King Maha Vajiralongkorn as she waits for him to appear at the balcony of Suddhaisavarya Prasad Hall . Lillian Suwanrumpha / AFP

Over the weekend she took to Facebook to post personal shots of her family members — including one where she flashed a rock-and-roll sign next to her grinning teenage stepbrother.

Whether a part of the palace's PR campaign or just a result of modern smartphone-savvy royals, the informality drew a positive response from Thais.

"Seeing another side (of them) which is not official is nice," said a supporter who declined to be named due to sensitivity over discussing royal life.

The king's eldest sister Princess Ubolratana has long used Instagram as a way to communicate with fans.

She drew headlines in February when she tried to stand for prime minister with an anti-junta party. The king thwarted the bid with a royal command and the party was later dissolved.

Though she was seen hugging the king on the eve of the coronation, she was asked in the comments section of an Instagram photo she posted on Saturday why she did not receive a royal title during the event.

"Because my work is in this style," she said. "It's more convenient and effective this way."

I felt "overwhelmed when I saw his majesty standing over there

The three-day event — the first coronation in Thailand in 69 years — cemented Vajiralongkorn's position at the top of one of the world's richest monarchies.

He placed the 7.3-kilogramme Great Crown of Victory on his head on Saturday.

On Sunday the king was carried through Bangkok's old quarter on a gilded palanquin in a colourful seven-hour procession. But the display was wedged between a disputed election in March and the announcement of poll results set for later this week.

The Palang Pracharat party — aligned with the arch-royalist junta that seized power almost five years ago — claimed the popular vote, but a coalition of "pro-democracy" parties say they have a lower house majority. Analysts say the sequencing of events is important. "The powers that be are clearly calculating that Thais will be more pliant at this moment in time — and thus less likely to mount protests" after results, said Karen Brooks, adjunct senior fellow for Asia at the Council on Foreign Relations.

"We will know soon enough if that calculation is correct."