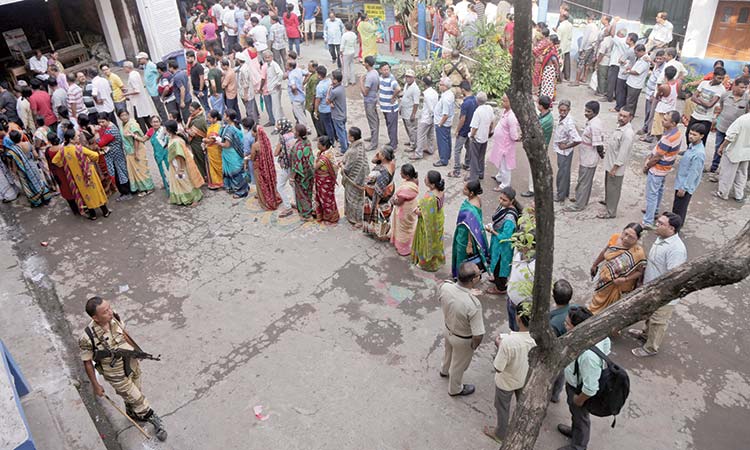 Voters stand in queues to cast their votes at Baksara in Howrah on Monday. Associated Press

Millions of Indians voted on Monday in the crucial fifth phase of country’s marathon elections, including in two constituencies in the vote-rich state of Uttar Pradesh where opposition Congress party President Rahul Gandhi and his mother, Sonia Gandhi, hope to retain their seats.

More than 25 million people were registered to vote for 14 members of India’s Parliament in Uttar Pradesh in northern India, where temperatures were scorching and security was tight.

Monday’s voting was held in 51 constituencies spread over seven states.

India’s multi-phase elections, which started April 11 and last five weeks, are seen as a referendum on Prime Minister Narendra Modi and his Bharatiya Janata Party (BJP), which controls Uttar Pradesh.

In Indian-controlled Kashmir, suspected rebels fighting against Indian rule lobbed a grenade at a polling station in a village near Pulwama town, police said. No one was reported hurt.

Voting for one parliamentary seat is being spread over three days because of security threats posed by almost daily clashes, government crackdowns and anti-India protests.

On Sunday night, Kashmiri youths hurled stones at election staff and their security guards as they moved into schools and government buildings to set up polling stations in the area. Troops fired shotguns and tear gas to quell anti-India protests, injuring several people, police said.

Voting also was held in the remote mountainous Ladakh region, which has India’s highest polling station at an altitude of 4,570 metres. Another high-altitude polling station was set up for only 12 voters in the cold desert region.

Monday’s polling marked the completion of voting for more than 400 out of 543 parliamentary seats. The 39-day process will be completed on May 19. The counting will be held on May 23.

The election’s fifth phase was a war of titans.

Rahul Gandhi is pitted against the government’s textile minister, Smriti Irani, for Amethi.

Irani lost to Rahul in 2014 polls but in the last five years has steered central government funds for development to the constituency and visited often.

Rahul Gandhi on Monday did not turn up in his parliamentary constituency Amethi where polling was on along with 50 other Lok Sabh seats across seven states in the fifth phase of Lok Sabha elections.

He was busy in a public rally in Haryana’s Bhiwani while voting was on in his own constituency which has sent him to the Lok Sabha thrice before -- in 2004, 2009 and 2014.

Rahul is also contesting the election from Wayanad, a district in the southern state of Kerala. In India, it’s possible to run in more than one constituency, but one can represent only one seat in Parliament.

His sister, Priyanka Gandhi Vadra, who is also national general secretary of the party, carried out intensive campaigns in both Amethi and Rae Bareli, and predicted her brother would carry Amethi by an even larger margin than in 2014.

In other races, powerful Home Minister Rajnath Singh is in the fray from Lucknow, the capital of Uttar Pradesh. Another Modi government minister, Menaka Gandhi, who has strained relations with her sister-in-law Sonia Gandhi, is contesting from Sultanpur.

Amid attacks on two BJP candidates, Arjun Singh and Locket Chatterjee, and also on polling agents of oppositions parties in West Bengal along with cases of intimidation, violence, bombings and EVM glitches, nearly 74 per cent of electorate in seven constituencies in the state voted till 5 p.m. on Monday in the fifth phase of Lok Sabha polls.

BJP has demanded re-polling in West Bengal’s Barrackpore parliamentary constituency, alleging that the Trinamool Congress had resorted to rigging and violence to win the elections.

Ignoring the scorching heat, 57.86 per cent of the over 87 lakh electorate in Bihar’s five constituencies which went to the polls in the fifth phase on Monday cast their vote till 6:00pm, officials said.

Jharkhand on Monday recorded around 64 per cent voter turnout in the second phase of polling in the state that took place in four parliamentary constituencies, an official said.