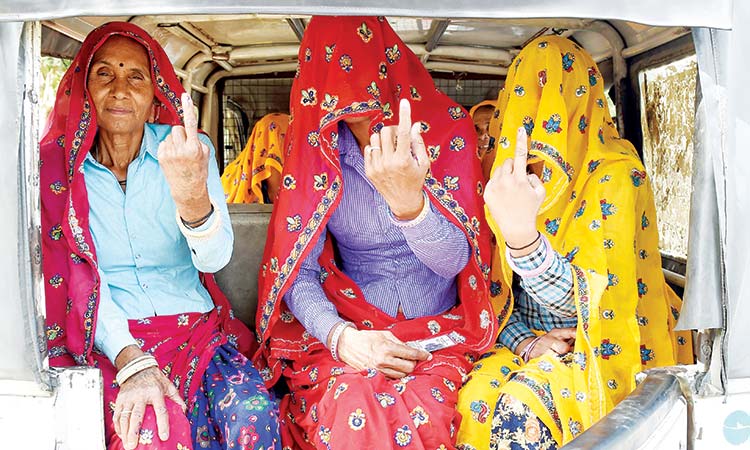 Women show their ink-marked finger after casting their votes in Alwar on Monday. Agence France-Presse

His police chief Loknath Behra had last week ordered a probe into the electoral fraud by the officers loyal to the ruling Communist Party of India (Marxist) or CPM.

They were heard forcibly obtaining postal ballots in WhatsApp messages a television channel broadcast, which a probe by its intelligence wing confirmed this week.

The southern state voted on April 23 to pick 20 members to the national parliament in staggered elections that entered its fifth phase on Monday and is awaiting results May 23.

The opposition terms it as rigging by the CPM-backed Kerala Police Association and questions the continuing silence by the chief minister.

“A section of officers was trying to sabotage free and fair democratic process blatantly,” said Mullappally Ramachandran, the Congress party chief in the state.

“He failed to act as the chief minister, and he’s still behaving like a CPM satrap. His moves are mysterious.”

He asked Vijayan to drop the officers from service and initiate criminal proceedings against them.

The police had last week book a few workers of the CPM and Indian Union Muslim League (IUML), a Congress party ally, for impersonation and bogus voting.

“We haven’t seen such blatant misuse of power during any elections. Even the dead were casting their votes,” he said.

“They also removed tens of thousands of voters from electoral rolls who are not in the CPM good book.”

He said thousands of workers in Wayanad constituency, where Congress president Rahul Gandhi ran, could not find their names on the final rolls.

The Congress party has decided to move legally to “bring to book the booth level officers who committed the fraud.”

The four-page intelligence report has reportedly recommended action against two police officials besides a comprehensive probe.

Behera had earlier promised disciplinary action against the officers if found guilty of indulging in the appropriation of postal votes of others on duty elsewhere.