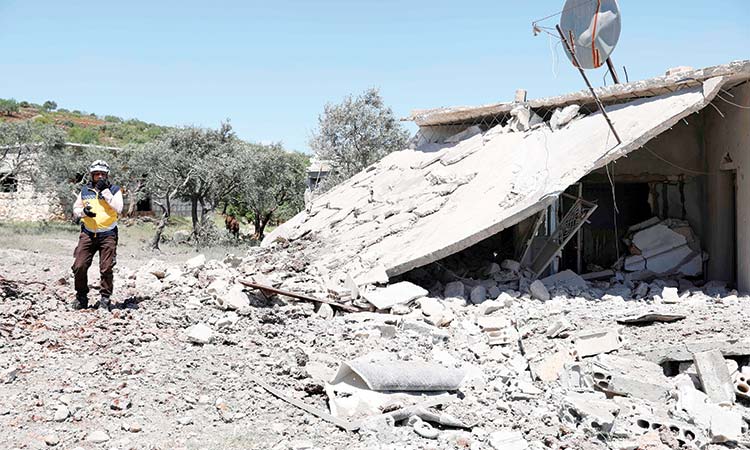 A civil defence official walks amidst the debris of homes following a bombardment in Idlib on Saturday. Agence Frannce-Presse

On Saturday, four Turkish soldiers were killed and two others wounded in two separate attacks by Kurdish militants from Tel Rifaat and northern Iraq, the Turkish defence ministry said, adding that the army had retaliated in both cases and killed 28 militants.

In an interview with broadcaster Kanal 7, Oktay said Turkey and Russia were discussing developments in the region and that Turkish military operations along the border would continue until all threats had been eliminated.

“The agreement was for us to stop there (Tel Rifaat), but if these attacks continue, this may take a different shape. We are discussing this with Russia,” Oktay said.

Separately, security sources said on Sunday that Turkish air strikes had killed five Kurdish militants in northern Iraq as part of an operation launched to retaliate against the cross-border attacks a day earlier.

The air strikes targeted the area across the border from the southeastern province of Hakkari, the sources said, adding that the army’s operation in the region continued.

Turkey’s military has regularly carried out air strikes against Kurdish militants in northern Iraq. It shelled positions held by the Syrian Kurdish YPG militia in the Tel Rifaat region earlier this year, saying this was in response to YPG fire.

Tel Rifaat is controlled by Kurdish-led forces and is located some 20 km east of Afrin, which has been under the control of Turkey and its Free Syrian Army allies since an operation last year to drive out the YPG.

In March, the defence ministry said Turkish and Russian forces had carried out the first “independent and coordinated” patrols in Tel Rifaat.

The latest fighting has killed dozens of people and displaced tens of thousands in Idlib and nearby rebel-held areas, who fled to safer regions further north. It’s the heaviest fighting in months, and has raised fears the government may launch a wider offensive to retake the country’s last major rebel stronghold.

Attacks on hospitals and clinics in the past have preceded major government offensives on rebel-held areas, including the 2016 attack on rebel-held parts of the northern city of Aleppo and last year’s offensive on eastern suburbs of the capital, Damascus.

The Britain-based Syrian Observatory for Human Rights said Russian warplanes were behind the attack on the main hospital in the rebel-held village of Hass.

The opposition-run activist collective Baladi News also reported the airstrike on the hospital, adding that it was not clear if there were casualties.

The Observatory said that since the early hours of Sunday, Russian warplanes carried out more than 50 airstrikes on Idlib and nearby Hama province. It said government and Russia bombardment killed at least six people on Sunday in different rebel-held areas.

Turkey’s Defense Ministry meanwhile said that two Turkish soldiers were wounded on Saturday when mortar shells fell near one of their positions in Hama province.

Turkey and Russia, who back opposite sides in Syria’s eight-year conflict, brokered a truce in September that averted a government offensive on Idlib.

But the truce has been repeatedly violated, and parts of it have yet to be implemented, including the withdrawal of al-Qaida-linked militants from the front lines. Two major highways that cut through rebel-held areas were supposed to be reopened before the end of 2018 but remain closed.