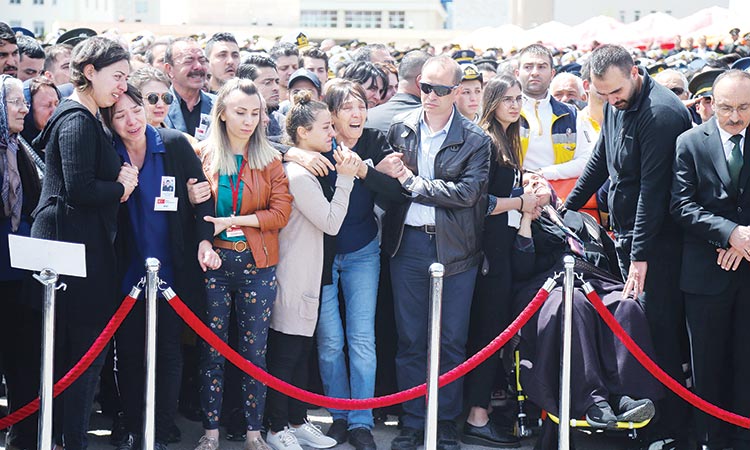 Relatives attend the funeral service of a soldier in Ankara on Sunday. Agence France-Presse

The main opposition Republican People’s Party (CHP) won control of the capital Ankara and Istanbul, the country’s biggest city, for the first time in 25 years in the March 31 local elections, in a major electoral setback for the president.

Erdogan’s ruling AKP and its nationalist MHP allies have since called for the results in Istanbul to be annulled and the election to be re-run, citing what they say are irregularities that affected the outcome.

While those appeals have been pending for weeks, the High Election Board (YSK) ordered partial and full recounts across Istanbul. Istanbul’s new CHP mayor, Ekrem Imamoglu, took office last month as the recounts were completed.

However, in its interim ruling on the objections, the YSK ordered district electoral officials to inspect their respective polling station officials. Prosecutors also launched probes into the alleged irregularities, calling 100 polling station workers in for questioning as suspects.

“The YSK (High Election Board) has examined our party’s and the MHP’s objections to the Istanbul election results. I believe it will make a decision tomorrow,” AKP candidate and former Prime Minister Binali Yildirim told reporters.

On Saturday, Erdogan signalled he favours a re-run of the Istanbul elections, which he said were marred by controversy, and added that renewing the vote would allow the YSK to “clear its name”.

AKP Deputy Chairman Ali Ihsan Yavuz later on Sunday told broadcaster A Para that the party was preparing to file criminal complaints on the irregularities, but that it would wait for the YSK’s ruling.

“With this many illegalities, the prosecutors won’t be able to rest. We formed a team to file criminal complaints,” Yavuz said.

Yavuz also said the AKP would file a new appeal to the YSK to block individuals dismissed through government decrees after a July 2016 coup attempt from being able to vote. The YSK rejected a previous appeal by the AKP on the same issue.