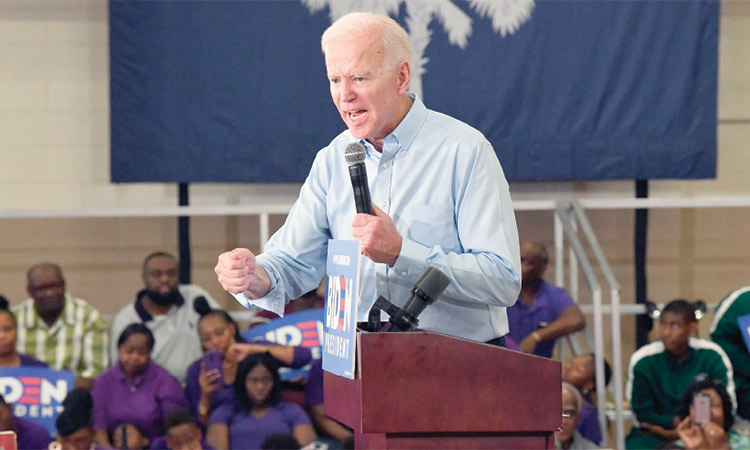 Joe Biden speaks at the first rally of his 2020 campaign in Columbia, South Carolina. Associated Press

Former Vice President Joe Biden charged Saturday that Jim Crow is “sneaking back in” as he emphasized the need to ensure voting rights are protected, which he said is lacking under the Trump administration.

Biden drew several hundred people to a community center in Columbia as he opened his presidential campaign in South Carolina, home of the first-in-the-South primary and where black voters play a major role in the Democratic nominating process.

In criticizing Republican attempts to reconfigure voting rules, including establishing identification requirements, Biden recalled the racial segregation laws of the past known as Jim Crow.

“You’ve got Jim Crow sneaking back in,” he said, and added: “You know what happens when you have an equal right to vote? They lose.”

Biden centered much of his speech around the need to restore decency to the White House, continuing to make his campaign a full-throttle assault against President Donald Trump.

“Quite frankly, I’ve had it up to here,” he said. “Your state motto is, ‘While I breathe, I hope.’ It’s not a joke. We’re breathing, but God, we have got to have hope.” Biden’s initial campaign agenda to South Carolina included a fundraiser and a Sunday morning visit to a black church in Columbia.

He opened his latest run for president with explicit appeals to white, working-class voters across the Midwest, pledging his support for unions and promising to rebuild the middle class. Now, Biden is trying to gauge whether his message will resonate among black voters whose backing will be crucial in South Carolina and elsewhere.

Ahead of her husband’s remarks, Jill Biden emphasized the couple’s long ties to South Carolina, saying they came to the state to grieve after their son Beau died of cancer in 2015.

“Joe and I love South Carolina,” she said.

The former vice president credited the late South Carolina Sen. Fritz Hollings with persuading him not to abandon public office after Biden’s first wife and daughter were killed in an auto accident weeks after his election to the Senate in 1972. Last month, Biden traveled to Charleston to eulogize his longtime desk mate and friend .

Biden also noted his friendship with Rep. Jim Clyburn, one of the top-ranking House Democrats. Clyburn, who typically doesn’t endorse a candidate before the South Carolina presidential primary, didn’t attend Biden’s event, but Biden noted one of Clyburn’s daughters is at the rally.

Sen. Amy Klobuchar is knocking Trump as being too soft on Russian President Vladimir Putin during their recent phone call.

Trump and Putin on Friday had their first known call since the release of the special counsel’s report on Russian election meddling, and Trump said he didn’t warn the Russian president against interfering in future elections.

Klobuchar told reporters after an event in Des Moines, Iowa, that her message would be very different.

Klobuchar also said she was frustrated that congressional investigators haven’t been able to question special counsel Robert Mueller, whom she described as “the witness we need to go after Russia so that they don’t attack our elections again.”

Rep. Seth Moulton of Massachusetts is calling for more funding for the State Department.

His remarks while campaigning in New Hampshire evoked former Defense Secretary Jim Mattis, who said if funding for the State Department is cut, “then I need to buy more ammunition.”

Moulton said his own experience serving as a Marine in the Middle East showed the importance of diplomacy.

Under his presidency, Moulton said, “we will see a lot less money in the military compared to the State Department.”