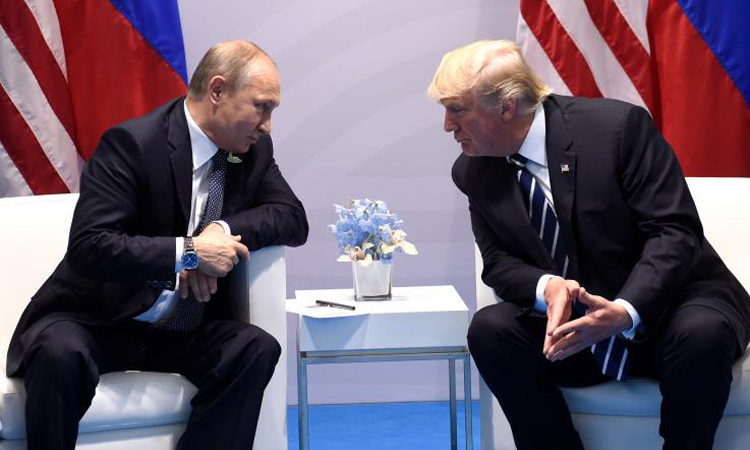 The US leader adopted a strikingly conciliatory tone following a more than hour-long conversation with Putin, coming days after an abortive military uprising in support of Juan Guaido, the opposition leader seeking to drive Venezuelan President Nicolas Maduro from power.

“It was a very positive conversation,” Trump said. “He is not looking at all to get involved in Venezuela other than he’d like to see something positive happen for Venezuela.”

“And I feel the same way. We want to get some humanitarian aid. Right now people are starving.”

Trump’s tone came in stark contrast to that of his top advisors, in particular Secretary of State Mike Pompeo who charged this week that the socialist Maduro had been poised to flee to Cuba, but was talked out of it by the Russians.

Recognised as interim leader by more than 50 countries including the United States, Guaido has vowed to keep the pressure up on Maduro, urging his supporters to stage peaceful demonstrations at military bases on Saturday in a fresh bid to rally the armed forces behind him.

US-Russian tensions have spiked over the months-long standoff in Venezuela, and the Kremlin’s assessment of the Trump-Putin call differed substantially from that coming from the White House.

“Interference in internal affairs, attempts to change the leadership in Caracas through force, undermine the prospects for a peaceful settlement of the conflict,” said a Russian statement.

“Vladimir Putin stated that only the Venezuelan people have the right to decide the future of their country,” it added.

The United States has imposed tough sanctions and Trump has refused to take the threat of military action off the table, in an intensifying campaign to drive Maduro from power.

Washington is insisting Maduro’s days are numbered — but experts say US options for breaking the stalemate are limited, and that Washington may have overestimated the opposition leader’s strength.

Acting Defence Secretary Patrick Shanahan hosted Pompeo at the Pentagon on Friday along with National Security Advisor John Bolton and Admiral Craig Faller, commander of the US Southern Command.

Reiterating Trump’s position — that “all options” are on the table — Shanahan declined to provide any details on a possible military intervention.

“I’m trying to avoid walking into ‘We could do this or we could do that,’“ he said. “What people should feel confident about is we have... there’s depth to these plans.”

“We have a comprehensive set of options tailored to certain conditions and I’m just going to leave it at that.”

Guaido plans to have his supporters mass outside military bases on Saturday, and deliver a proclamation to those inside, pleading with them to break with Maduro.

“Peacefully, civically... we are going to deliver a simple document, a proclamation to the Armed Forces to listen to the Venezuelan call, that a rapid transition is possible to produce free elections,” Guaido told a press conference in Caracas.

Tensions in Venezuela have soared since Guaido, the 35-year-old head of the National Assembly, invoked the constitution to declare himself acting president on Jan.23, claiming Maduro’s re-election last year was illegitimate.

On Tuesday the opposition leader called on the military to rise up against Maduro, and a small group heeded his call.

But the movement petered out — with 25 rebel soldiers seeking asylum at the Brazilian embassy in Caracas — sparking two days of protests during which four people were killed and some 200 injured.

The influential opposition figure Leopoldo Lopez — who made a dramatic appearance alongside Guaido after being freed from house arrest — has since taken refuge at the Spanish embassy.

Venezuela’s military leadership has since reiterated its support for the government, and Maduro is standing his ground.

The lack of progress left nations backing Guaido facing “a very confusion situation,” a diplomatic source told AFP on the sidelines of the meeting.

“The reality is that the military leadership resisted the attack and are united,” he said.

“There are cracks, but not in the military leadership,” said the source. “International pressure via economic sanctions is the way to weaken the Chavist regime.”