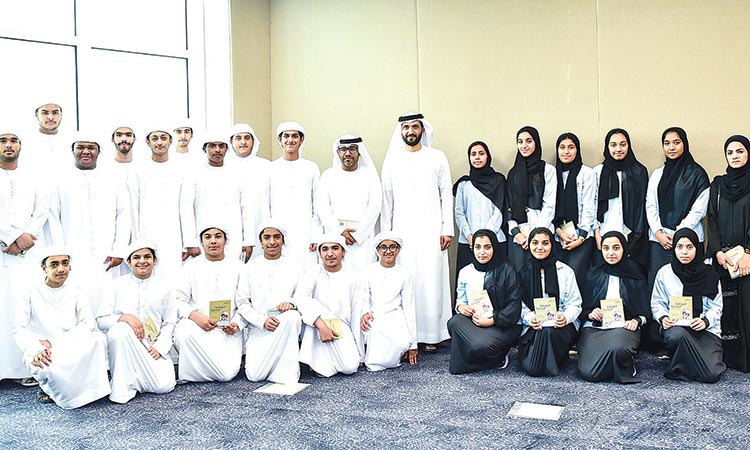 Over thirty students took part in the HCT and MFNCA workshop on the political participation in the upcoming FNC elections in Fujairah. WAM

The workshop saw over 30 high school students taking part. It was led by Dr Ahmed Al Khuzaimi from the Ministry of Interior, and forms part of the MFNCA’s efforts and initiatives to promote the culture of political participation among all segments of the community, urging them to take part in the upcoming fourth FNC elections.

During the event, Dr Al Khuzaimi underlined the UAE leadership’s focus on the youth, reflecting its unwavering faith in their role in preserving the country’s national and global achievements across multiple sectors.

“The UAE is progressing steadily along its mission to craft a pioneering parliamentary experience that follows a gradual approach that caters to the singularities of Emirati society,” he said.

“This is part of the effort to implement the Political Empowerment Programme, launched by President His Highness Sheikh Khalifa Bin Zayed Al Nahyan, to serve as a national framework designed around the requirements of comprehensive sustainable development across all sectors, and that seeks to engage Emirati nationals in the effort to propel the UAE to the fore of all national indexes.”

“The FNC is a leader in terms of empowering citizens, enhancing their role in sustainable development, and helping them realise their ambitions by discussing the issues that matter most to them,” Dr Al Khuzaimi noted. “The Council offers an exemplary approach for fostering effective partnerships between the executive and legislative branches of government, and for driving comprehensive development and building a modern state.”

“We are on the cusp of yet another important national event with the FNC elections, which compels us all to actively participate in the polls to ensure their success and excellence, and to express our gratitude to our country and loyalty to our national identity. This is our opportunity to continue with the Council’s achievements and build a better future for our current and upcoming generations,” he concluded.

This lecture is part of a series of activities organised by the Ministry of State for Federal National Council Affairs to promote political awareness and enhance communication with all segments of society. It also serves to achieve the ministry’s vision and strategic objectives to build long-term national partnerships.

Employers are vital partners to ensuring the rights of Emiratis are sustained, and attaining the UAE’s overall objectives and visions, said an official from the General Pension and Social Security Authority (GPSSA).

Hanan Al Sahlawi, GPSSA Acting Executive Director, said that the Authority considers employers as strategic partners to achieve the objectives of the country that aim to secure social security benefits for its citizens, by granting them fixed monthly incomes should an insured employee encounter a hazardous incident while fulfilling their work obligations.

In a statement, the authority confirmed that social security enhances privileges offered by the country to its citizens and their families. It went on to note that the UAE Constitution has recognised and included clauses to ensure that care is provided to persons who are unable to work as a result of natural or occupational hazards, including diseases or ailments, disabilities, and unemployment via the pensions and social assistance laws.

According to the GPSSA, Federal Law No. 07 of 1999 on Pension and Social Security, and its amendments obliges all government and private sector employers to register the UAE national employees that are subject to the provisions stipulated within the law. Employers are required to register their employees and to settle their contributions, and any fines and penalties incurred as a result of late contribution payments, the Authority explained.