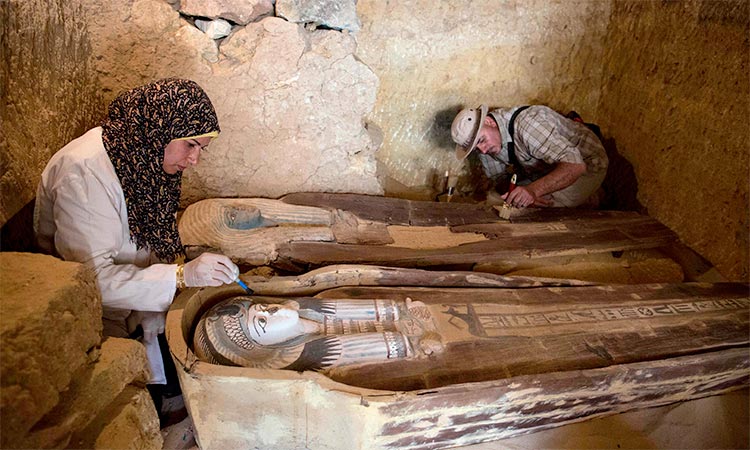 Excavation workers work inside a burial shaft at the Giza pyramid plateau on Saturday. Agence France-Presse

The site on the southeastern side of Giza plateau contains tombs and burial shafts from various periods, but the oldest is a limestone family tomb from the fifth dynasty (around 2500 BC), the ministry said.

An AFP photographer who was allowed to access the burial shaft saw inscriptions on the walls, intricately painted wooden sarcophagi and sculptures of animals and humans.

The ministry said the tomb was that of two people: Behnui-Ka, who had seven titles including the Priest and the Judge, and Nwi, also known as Chief of the Great State and “purifier” of the pharoah Khafre.

Khafre, known to the Ancient Greeks as Chephren, built the second of the three famous Pyramids of Giza.

“Many artefacts were discovered in the tomb,” the ministry said, icluding limestone statues of one of the tomb’s owners, his wife and son.

Ashraf Mohi, Director General of Giza Plateau, said the cemetery was re-used extensively during the Late Period, starting from the early seventh century BC. The ministry also displayed what it said were Late Period wooden coffins with hieroglyphics inscribed on their lids, along with wooden and clay funerary masks.

Egypt’s Antiquities Ministry says archaeologists have uncovered part of an ancient cemetery near the country’s famed pyramids on the Giza plateau just outside Cairo. Mostafa Waziri, secretary general of the Supreme Council of Antiquities, says on Saturday the cemetery houses burial shafts and tombs of top officials and a fine limestone statue from the Old Kingdom’s Fifth Dynasty (2465-2323 B.C.).

Ashraf Mohi, the head of the Giza Plateau archaeological site, says scientists know that the cemetery had been reused extensively in the Late Period (664-332 B.C.), as archeologists found painted and decorated wooden anthropoid coffins, and wooden and clay funerary masks from that period.

Egypt has touted a series of archaeological finds recently, hoping such discoveries will spur tourism, which suffered a major setback during the unrest that followed the 2011 uprising.