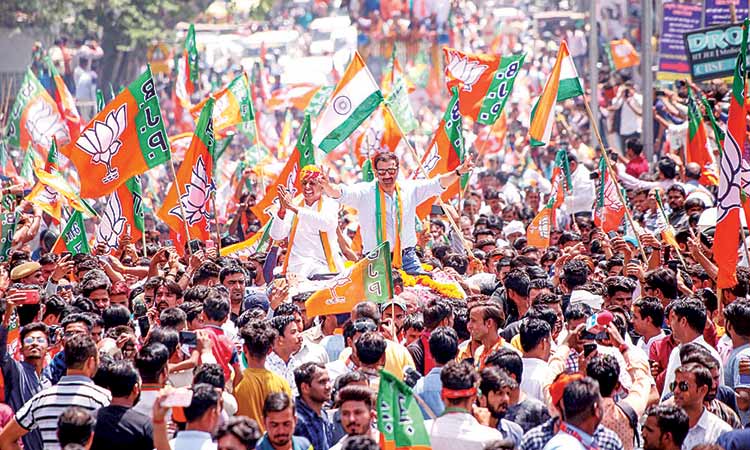 While BJP’s cricketer-turned-politician Gautam Gambhir is the second in the list with assets over Rs147 crore, National Election Watch and Association for Democratic Reforms (ADR) said on Friday.

Scindia, who is also in-charge of the Congress in western Uttar Pradesh, topped the list of 967 candidates.

The ADR has analysed the self-sworn affidavits of 967 out of 979 candidates, who are contesting in the sixth phase that goes to polls on May 12.

“There are 12 candidates who have not been analysed due to unavailability of their properly scanned and complete affidavits, at the time of making this report,” it said.

“The average asset per candidate contesting in sixth phase is Rs3.41 crores,” it said.

A total of 35 candidates have declared just that they are literate while 10 said they are illiterate.

In the sixth phase there 83 female candidates when 59 constituencies from seven states.

The fifth phase of the Lok Sabha election will be interesting and politically crucial for the politician fraternity of Bihar as the long term turfs of two heavyweights — RJD chief Lalu Prasad’s Saran and LJP supremo Ram Vilas Paswan’s Hajipur — will go to the polls on May 6.

The results of these seats would also decide the influence of the Rashtriya Janata Dal’s leader and the Lok Janshakti Party’s chief in their respective constituencies.

From the Saran parliamentary constituency which is considered the stronghold of Lalu and his family, the opposition grand alliance has fielded Chandrika Rai, an RJD leader and father of Lalu’s daughter- in-law. The National Democratic Alliance has fielded the brother of Paswan, Pashupati Kumar Paras, from the Hajipur seat.

Both Lalu and Paswan have been the first choice of voters in these constituencies but interestingly both of them are not contesting in this election.

Lalu has represented the Saran seat, earlier known as Chapra, four times in Parliament. The first time he was elected a member of parliament from the seat in 1977; thereafter, he won the seat in 1989, 2004 and 2009. However, he had also tasted defeat from here.

Rai is pitted against Bharatiya Janata Party leader and sitting MP Rajiv Pratap Rudy, hence, this election is linked to the prestige of Lalu and the entire RJD.

Similarly, Paswan represented the Hajipur seat in Parliament eight times but this time he has kept himself out of the fray. Paswan has fielded his younger brother and LJP state chief Paras who will take on the RJD’s Shivchandra Ram.

Political pundits are saying that the result on this seat will decide whether Paswan still has the same influence in the constituency as he had earlier or his support has been eroded.

Paswan won the seat for the first time in 1977 and has won from the constituency eight times. He also has a record of winning the election with the maximum number of votes in his name.

In this situation, although both the leaders are not contesting the elections personally but their prestige and influence are at stake.

RJD chief Lalu Prasad’s elder son Tej Pratap Yadav on Friday appealed to people not to support and vote for his father-in-law Chandrika Rai, who is the party candidate from Saran parliamentary constituency in Bihar.

Tej Pratap also refuted Rai’s statement that he would bring back his estranged wife to his home. “My divorce petition is in the court...I will seek divorce. There is no change in my stand.” Although he had said he might not campaign against Rai, he has been appealing to people with folded hands to ensure his defeat from Saran seat − a traditional stronghold of Lalu, his father.

BSP President Mayawati took on both Prime Minister Narendra Modi as well as the Congress on Friday as she campaigned in the Lok Sabha elections for the BSP candidates in Delhi. Accusing Modi of failing to work for the weaker sections, she told an election rally in Dilshad Garden area: