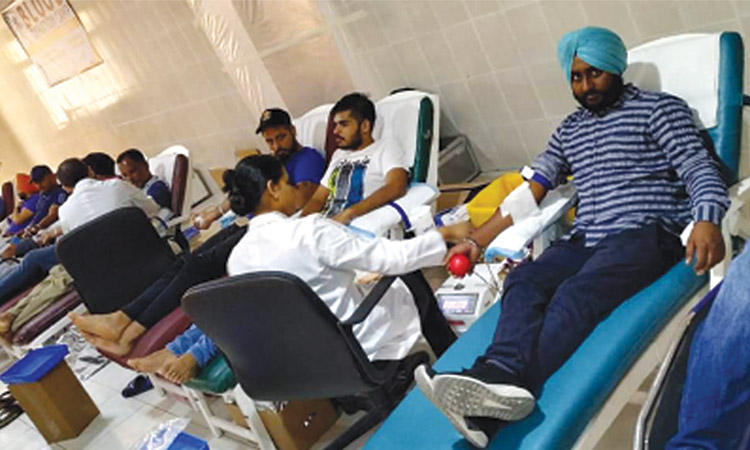 Some of the volunteers at the blood donation drive

More than 300 people from different segments of the society including a large number of blue collar labourers have attended the blood donation campaign on Friday.

The campaign was organised in continuation of Pehal International’s CSR initiative PCT (Pehal Charitable Trust) Humanity, a non-profit organization, at Terrazzo Labour Camp, Dubai Investment Park 1. The day-long drive was in collaboration with Dubai Health Authority ahead of the holy month Ramadan to meet the shortage of blood due to fasting.

Along with the blood donation, approximately seven ton food items also were distributed to blue collar people and the distribution was carried out by Surender Singh Kandhari, Chairman- Gurudwara Dubai. This camp was aimed at celebrating 550th birth Anniversary of Guru Nanak Dev and spreading the spirit of “Love, Tolerance and Peace” among the residents of the Emirate.

Jaspal Ahuja, Vice Consul of India to UAE commenting on this has said “blood donation is amongst the highest contributions rendered towards humanity, and expresses our solidarity as a community, inspired by our beliefs to venture beyond our core business and engage & serve the society at large. We hope that by uniting today to contribute to a cause like this, we can really make a difference, no matter how small.”

Mohammed Hamza Ahli, President PCT Humanity request people to donate blood and keep healthy and fit. He said the least we can do is save someone’s life. Lets bring joy and happiness and donate blood.

Surender Singh Kandhari, Chairman Gurunanak Darbar laid the importance of such life saving initiatives and urged people that this is such a noble cause wherein we should come and participate in maximum numbers. “By giving you never become poor and this initiative is dedicated to the Year of Tolerance,” he said.

Satya Takkali, board advisor in his message to the donors said “Humanity is our identity, to help and save the life is all of ours responsibility to help the needy people.”

Lovraj Talwar Chairman Terrazzo Ltd. said “You don’t lose anything if you donate blood as human body has a regenerating mechanism. Blood can’t be manufactured as other things can, it can only be given to save the lives. We collected the blood units more than our expectations.”