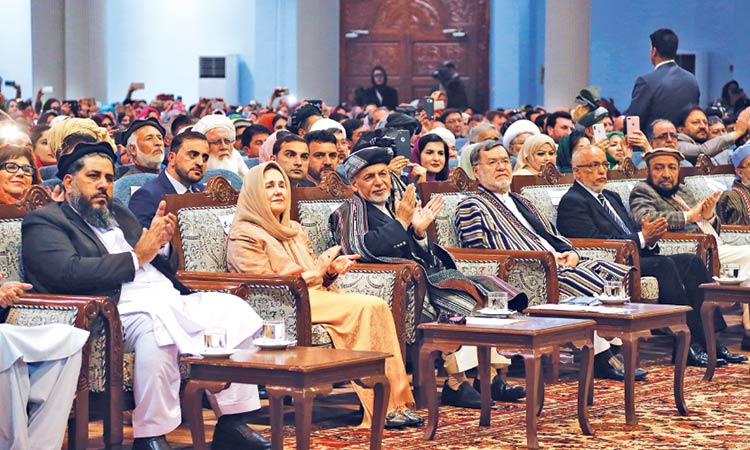 Ashraf Ghani (centre) and other officials attend the last day of loya jirga meeting in Kabul on Friday. Associated Press

KABUL: An Afghan grand council convened by President Ashraf Ghani ended on Friday with a resounding call for peace with the Taliban and a promise from the president to free 175 Taliban
prisoners ahead of the Holy Month of Ramadan, that starts next week.
The council — known as Loya Jirga — brought together more than 3,200 politicians, tribal elders, prominent figures and others to hammer out a shared strategy for future negotiations with the Taliban.
Ghani had sought to project a unified stance with the council but several prominent Afghans boycotted the gathering, including Ghani’s partner in the government, Chief Executive Abdullah Abdullah, exposing the deepening rifts in the administration.
“I want to say to the Taliban that the choice is now in your hands,” Ghani said at the closing ceremony in Kabul. “Now it is your turn to show what you want to do.”
Ghani said the message of the five-day gathering was clear: “Afghans want peace” and offered a ceasefire, though he stressed it would not be unilateral. In the statement on Friday, the Taliban rejected a ceasefire, saying attacks will continue during Ramadan but said “fighters are very careful of civilians during any operation.”
The group has rejected ceasefire proposals saying US and Nato troops must withdraw from the country first.
The Taliban called the Loya Jirga an attempt by Ghani to shore up his popularity and criticised it for not mentioning the latest United Nations report, which said the US and Afghan forces killed more civilians in the first three months of this year than the insurgents.
In recent months, the Taliban have stepped up their attacks, inflicting staggering casualties on Afghan forces, and now hold sway over half the country. The US, meanwhile, has accelerated efforts to find a peaceful resolution to the 17-year war — America’s longest conflict - and has pressed for direct talks between the Taliban and Kabul.
The US’s special peace envoy, Zalmay Khalilzad, has been crisscrossing the region since his appointment last year, seeking consensus among Afghanistan’s neighbors, as well as Russia and China, on the need for a peace settlement. President Donald Trump has also expressed his frustration with Washington’s longtime involvement in Afghanistan, as well as a desire to bring the estimated 14,000 US soldiers home.
The grand council produced a 23-point list for peace-talks with the Taliban, including a truce for Ramadan.
The Loya Jirga also urged the government to form a strong negotiating team and said at least 50 of its members should represent victims of wars. It wasn’t immediately clear whether that referred to wars that pre-dated the 2001 US-led invasion that toppled the Taliban regime.
The council also backed women’s rights, in keeping with the tenets of Islam. But after opening the council on Monday, Ghani handed over the chairmanship to Abdul Rasool Sayyaf, a former warlord with past links to Osama Bin Laden and the militants who took control of Kabul after the collapse of the communist government in the early 1990s. He is known for adhering to a strict interpretation of Islam, and refusing to meet with women.
“We want a sustainable peace in our country,” said Hatifa Tayeb, the council’s secretary and one of the women delegates. “No fight has a winner and no peace has a loser, so we all want from the Taliban to stop the conflict and join the peace process. “
Also this week, Khalilzad is holding talks a new round of talks with the Taliban in Qatar, where the insurgents maintain a political office. Those talks, however, are focused only on a timetable for the withdrawal of US troops and guarantees from the Taliban that Afghan territory will not be used in the future to harbor global terrorists.
The Taliban had for years harbored Al Qaeda and its former chief, Osama Bin Laden.
In their statement, the Taliban said once they have a deal with the United States on the withdrawal of its forces, they will then consider talks with members of the Afghan government “to resolve internal issues.”
Associated Press

Trump says he cancelled peace talks with Taliban over attack

US President said he had planned a secret meeting with the Taliban's "major leaders" on Sunday at a presidential compound in Camp David, Maryland. Trump said he also planned to meet with Afghanistan's president.