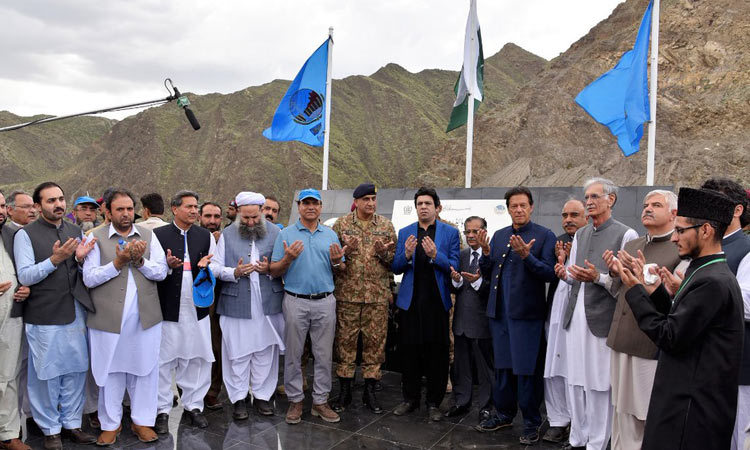 Imran Khan, army chief and other top officials pray at the site of the Mohmand Dam on Thursday. Twitter photo

Pakistan's Prime Minister Imran Khan performed the ground-breaking of the historic Mohmand Dam on Swat River in Mohmand tribal region on Thursday and thanked the people for contributing in the dam fund.

Addressing the ceremony, he said China has built thousands of dams of which 5,000 were larger than Tarbela and Mangla dams in Pakistan.

The prime minister said underground level of water in Pakistan has gown down to alarming levels and the dams were the only way to meet the demand. He said the Chinese experts laced with modern technology would also assist the Pakistani engineers to complete the project.

Imran said he realises the problems facing the tribal areas more than any other prime minister who have come to power. He said the government would convince all the federating units to provide funds for the development of tribal areas from their share of National Finance Commission (NFC) Award.

Highlighting the importance of development of tribal areas, he said war has destroyed shops and animals of local people depriving them of means of earning. He was of the view that apathy towards unemployed youth can lead to disastrous consequences for the entire country.

The Mohmand Dam is being constructed on the Swat River and it will be completed by 2024. The dam has the capacity to store1.2 million acre feet of water. Upon completion, it will generate some 800MW of electricity. 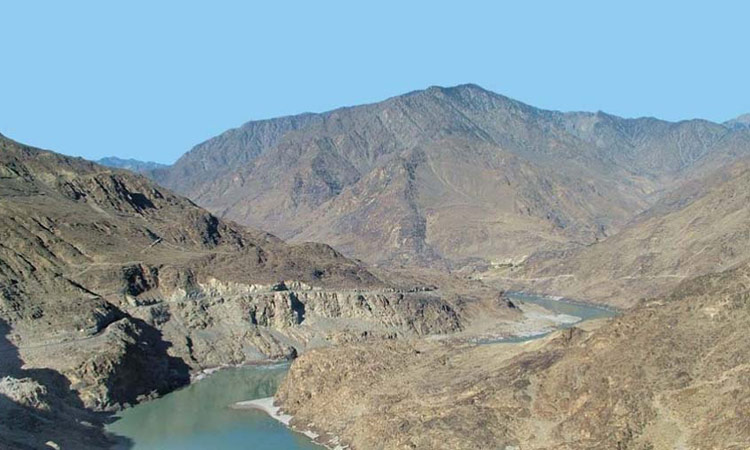 The site of the Mohmand Dam on Swat River in Mohmand agency. Twitter photo

The construction of the dam is said to be imperative to resolve the problems of water scarcity and electricity shortfall in Pakistan. A sum of Rs2 billiion has been allocated for the project in the Public Sector Development Programme 2018-19.

The much-awaited inauguration ceremony of the Mohmand Dam was to be held in January, but postponed amid reports that had emerged of the award of the contract of the hydropower project on a single-bid basis to a consortium of three companies led by Descon, a company previously owned by Abdul Razak Dawood in which he and his family members hold ownership stakes.

Former Chief Justice Mian Saqib Nisar had taken offence over not being informed about the rescheduling of the ceremony and said he may not attend. It was rescheduled again.
He had paid close attention to the issue of water scarcity and ordered the creation of the Dam Fund in July last year ─ a fund that appealed to the general public and overseas Pakistanis for donations for the construction of the Mohmand Dam and the Diamer-Bhasha Dam.

The top judge's initiative was later joined by the prime minister. Within a span of five months, a total of Rs8.46b was deposited in the Supreme Court of Pakistan and the Prime Minister of Pakistan Diamer-Bhasha and Mohmand Dams Fund, according to State Bank of Pakistan data in December 2018.

Nisar also addressed the ceremony and highlighted the nation's generous contribution towards the dam fund. Emphasising the importance of building dams, he said: "Water is our life."

"The Supreme Court hasn't done a favour to any one [since it initiated the dam fund]. The dam has become a campaign and a movement," he said. "I am hopeful, because of the manner in which you worked and the will and resolve with which the chairman Wapda worked, that the dam will be completed within the stipulated time and budget.”

Imran said the ‘Naya Pakistan’ would be built on the pattern of State of Madina where the writ of law would be established. He said the Holy Prophet (Peace Be Upon Him) had set the foundation of the state on social and economic equality.

“The Holy Prophet (PBUH) once said he would even cut the hands of his own daughter if she was found guilty of theft,” he added. The prime minister maintained that the State of Madina was a benchmark for modern welfare states.

He said when a wealthy politician was questioned about the source of his wealth, he propagated that democracy was in danger. "In fact such people make a hue and cry to hide their illegal wealth.”

The prime minister said no NRO (National Reconciliation Ordinance) would be given to any corrupt. Letting the corrupt go scot free would be betrayal and injustice to the nation, he added.

He praised Wapda Chairman Lt Gen (retd) Muzamil Hussain for his dedication and professional diligence towards the construction of dams.

The prime minster also extended special gratitude to Saqib Nisar for initiating campaign for collection of funds for dams construction.

Earlier, the Wapda chairman and project director of the dam briefed the prime minister about salient features of the project.

DoH has been in direct coordination with Abu Dhabi Police and Abu Dhabi Civil Defence Authority, and confirms injured cases that have resulted from the gas cylinder explosion incident in a restaurant at Al Khalidiya area are being looked after in Abu Dhabi.