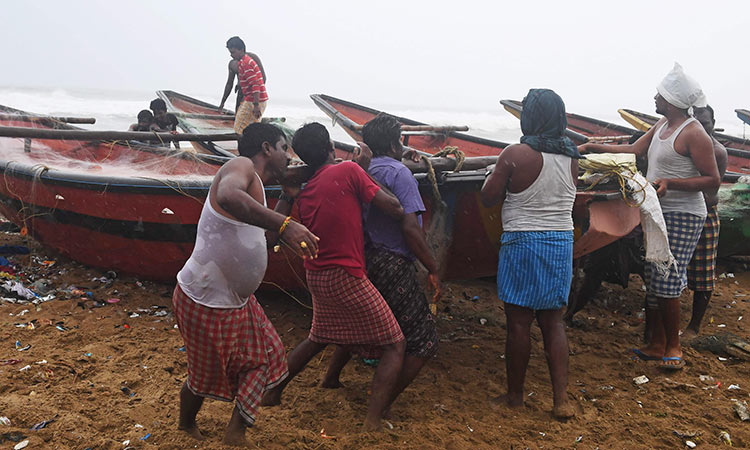 Indian fishermen pull a boat to higher ground on a beach in Puri. Agence France-Presse

The Indian weather service said Extremely Severe Cyclonic Storm Fani should make landfall on Friday around noon (0630 GMT) in Odisha state and barrel north-northeastwards towards Bangladesh on a pathway that is home to more than 100 million people.

In Odisha on Friday, along with “extremely heavy” rainfall in places, a storm surge of about 1.5 metres is “very likely” to inundate some low-lying areas, according to the Indian Meteorological Department.

A state relief department official told reporters that 780,000 people were moved to safer places overnight from at least 13 districts of Odisha, home to 46 million people, which will bear the brunt of the storm.

More than 100,000 dry food packets are ready to be dropped if needed, reports said.

The prime minister was briefed on the likely path of the cyclone, and the ongoing precautionary and preparatory measures being undertaken, said the statement.

“These include provision of adequate resources; deployment of teams from NDRF and the Armed Forces; arrangements to provide drinking water; and standby systems to restore power and telecom services.”

On Thursday the storm, which reports said was the biggest to hit eastern India in nearly two decades, was brewing in the Bay of Bengal and moving steadily and ominously towards land.

It was predicted to pack sustained wind speeds of 180-190 kph and gusts up to 200 kph, equivalent in strength to a Category 3 to 4 hurricane.

It was expected to make landfall near the town of Puri, a major tourist hotspot.

More than 100 trains have been cancelled in the past 48 hours, according to Indian Railways.

Three special trains were running from Puri to evacuate pilgrims and tourists.

Flights have been cancelled in and out of Odisha’s capital Bhubaneswar for 24 hours from midnight.

Authorities have asked tourists to leave coastal areas and avoid unnecessary travel. Special buses have been deployed in Puri and other towns.

The management of one hotel in Puri visited by media as intermittent heavy rain fell outside had been told to vacate all 175 rooms, causing a wedding party to be cut short.

Dozens of officials were making announcements on hand-held megaphones across the coastal belt asking residents to leave their homes.

Fishermen have been advised not to venture out and the Indian Navy has also been put on alert.

“Heavy rains are expected in all the coastal districts amid fears of flash floods. We are all geared up for the challenge,” said Sethi.

Forecasters have warned of the “total destruction” of thatched houses, the bending and uprooting of power and communication poles, the “flooding of escape routes” and damage to crops in some areas.

Coastal-area farmers in Bangladesh were instructed to harvest their paddy fields as a surging tide may inundate and ruin crops.

Fani is the fourth major storm to slam into India’s east coast in three decades, the last in 2017 when Cyclone Ockhi left nearly 250 people dead and more than 600 missing in Tamil Nadu and Kerala.