Crowds to flood Khartoum as standoff with military persists - GulfToday 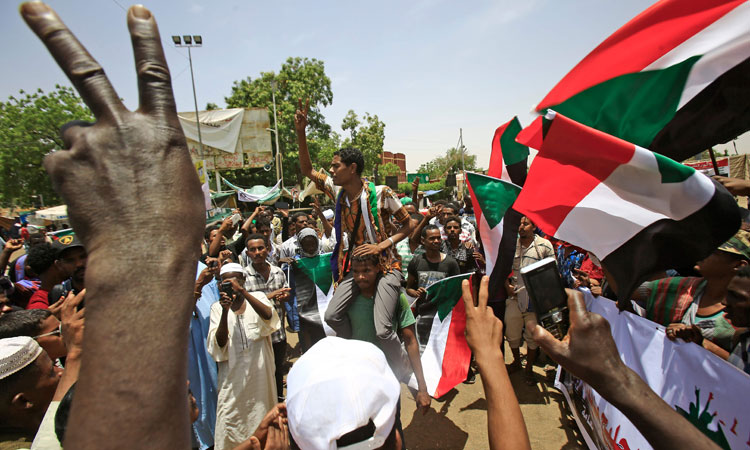 Sudanese protesters chant slogans during a sit-in outside the army headquarters in the capital Khartoum on Wednesday. Ashraf Shazly/ AFP

The two sides have agreed on forming a joint civilian-military council to run Sudan but are at odds over its composition.

Protest leaders from the Alliance for Freedom and Change say the army is not serious about handing power to civilians, three weeks after it toppled autocratic president Omar Al Bashir.

The army, which took over after Bashir’s ouster on April 11, has been pushing for a 10-member council including seven military representatives and three civilians.

The alliance is demanding a council made up of eight civilians and seven generals.

The disagreement prompted the alliance to announce a “million-strong march on May 2 to assert our main demand, which is for civilian rule.”

The call has exacerbated tensions between the two sides.

The military council has warned it will not allow “chaos” and urged protesters to dismantle makeshift barricades they have set up around the main protest site outside army headquarters.

It also demanded protesters open roads and bridges blocked by demonstrators who have camped outside the headquarters for weeks, even after Bashir’s ouster.

Adding to the deepening discord, the military council said six security personnel were killed in clashes with protesters across the country on Monday.

As both sides in the standoff remained intransigent, they held separate news conferences on Tuesday to explain their divergent views.

“The military council is not serious about handing over power to civilians,” said Mohamed Naji Al Assam, a leader of the Sudanese Professionals Association (SPA) spearheading the protests.

“The military council insists that the (joint) council should be military led with civilian representation,” Assam said, adding the army had been seeking to “expand its powers daily.”

In an interview with AFP, Sudan’s main opposition leader Sadiq al-Mahdi on Wednesday warned protest leaders against provoking the military.

“If we provoke the... armed forces which contributed to the change, we would be asking for trouble,” he said.

The military council’s deputy head Mohammad Hamdan Dagolo has said it is “committed to negotiations but (will allow) no chaos.”

Hamdan, widely knowns as Himeidti, and some of his colleagues spoke of incidents since the protests first broke out in December over the tripling of bread prices, including looting and burning of markets across Sudan.

The spokesman of the military council, Lieutenant General Shamseddin al-Kabbashi, said the “armed forces must remain in the sovereign council” because of tensions facing the country.

Sudan’s protests took a new turn on April 6 when thousands of people began setting up a makeshift camp outside army headquarters in Khartoum, urging the military to back them in ousting Bashir.

Since then the 10-member council of generals has resisted calls to step down and demonstrators accused them of being little different from Bashir.

But in a breakthrough on Saturday, the two sides agreed to form a joint civilian-military body to pave the way for a civilian government after lengthy talks.

The protesters have won support from Western governments for their demands.

But a new round of talks with the military council to iron out their differences has yet to be decided.

The African Union on Tuesday gave Sudan’s military rulers another 60 days to hand over power to a civilian authority or face suspension, after an earlier deadline was missed.